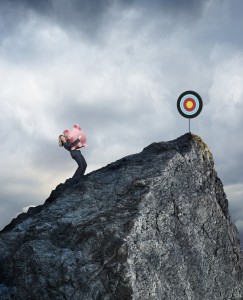 Private equity asset managers see a large potential asset base as trillions in retirement dollars shift to 401(k) and other defined-contribution plans and away from traditional defined-benefits plans.

But for now, GPs and asset managers see more near-term inflows from high-net-worth individuals rather than less affluent people.

The challenge of tapping mom-and-pop stock-market investors emerged as a common theme among speakers at the PartnerConnect East 2016 conference April 5 and 6 at the Hyatt Regency Boston.

Much of the retirement money private equity firms manage comes from public pension funds and other defined-benefit plans. But fewer and fewer of these exist in the private sector, where 401(k) and other defined-contribution plans dominate.

While inflows from sovereign-wealth funds have taken up some of the slack, private equity has drawn little or no share of the vast amount of 401(k) money out there.

At last check, defined-contribution plan assets tipped the scales at $13.8 trillion, 42 percent above the $9.7 trillion in traditional pension plans, according to data from Hamilton Lane.

Hartley Rogers, chairman at Hamilton Lane, said at the conference that PE firms may continue to compete with each other for investor dollars, but the larger rivals remain tech-savvy money managers like State Street, BlackRock and Goldman Sachs for defined-contribution-plan money.

“Those people are aggressively pushing into this business,” Rogers said during his keynote address. “We and our private equity brethren have to change. The key to that change is adopting data and technology.”

Technology will enable private equity to offer many of the same features as public equities, such as daily prices on fund assets and regular liquidity, much faster than traditional private equity funds, he said.

Rogers sees irony: Private equity and venture capitalists helped seed the upsurge in financial technology, dating to the 1990s and earlier, but many of the same shops have been slow to integrate technology into their own businesses.

The appeal to individual investors for private equity remains compelling when crunching returns from Hamilton Lane’s database of nearly 3,000 funds stretching back decades, he said.

Mike Elio, partner at StepStone Group, said demand for private equity investments from wealthy individuals — those with $1 million or more in assets outside their primary home — remains “off the charts.” Other products, such as feeder funds, target accredited investors, who have at least $5 million.

“There’s a lot of money on the sidelines,” Elio said. “They need to feel there’s a trigger for private equity like energy dislocation. … They’re also addicted to yield. They’d love something that throws off money every quarter.”

PE managers spend time educating investors about lockups, fees and well-known brand names in the space. Still, when they’re told that their money may be locked up for 10 to 12 years, some may get gun shy, Elio said.

Joel Kress, COO of Pomona Investment Fund, a retail-investor fund launched by Pomona Capital, said that after two years the pool provides quarterly liquidity of as much as 5 percent of the net value of the fund.

After the first two years, the fund “got a run” of investors that pulled some money out, but after that redemptions leveled out, he said.

Pomona Investment Fund has now topped $50 million in assets under management with a portfolio that includes exposure to several private equity funds. (See action item below.) Investing in secondary positions as well as private debt may also provide quicker returns to help liquidity in a fund of this type, executives said.

Andrea Auerbach, managing director at Cambridge Associates, said during her keynote address that returns offered to both institutional and individual investors may get squashed over time because of high purchase-price multiples paid for buyouts nowadays.

Purchase-price multiples have risen to about 11x Ebitda, much higher than historical levels.

“There seems to be a break point at 8x Ebitda,” Auerbach said. “When they go through that … returns tend to get worse.”

Tony Tutrone, global head at NB Alternatives, said he saw no reason that working people shouldn’t have access to private equity to diversify their portfolios and tap into superior returns that the asset class offers. Working out the regulatory, fee and other issues associated with it will take time, he said.