In fact, Apollo Global Management, Blackstone Group, Carlyle Group and Kohlberg Kravis Roberts & Co have fallen more sharply than the 11 percent drop in the S&P 500 in less than six weeks of trading in 2016.

Pushed further into the red in an ugly market day on February 11, Apollo was off 17 percent year-to-date, Blackstone was down 20 percent, Carlyle Group was off by 25 percent and KKR was down 28 percent.

Typically, buybacks increase upward pressure on stocks because they reduce the number of shares in circulation. But in the bear market of 2016, these moves haven’t yet helped. As the saying goes on Wall Street, you can’t fight the tape. That applies to powerful buyout shops.

Sure, these firms hold tens of billions in dry powder to invest at low prices during the downturn, on top of strong balance sheets.

But their economic income — the key metric for the relative value of their public units — lacks the visibility that Wall Street craves, compared to other asset managers, which trade at a higher relative value.

While they collect steady management fees, alternative investment firms also book incentive income on managed funds and investment income on fund co-investments. These are harder to predict, because they’re marked to market on quarterly basis, Fitch analyst Meghan Neenan said in a recent research note. On top of that, strong marks and investment gains may be at risk nowadays, Neenan said.

“Many believe this cycle is coming to an end, which would hurt economic net income and cash earnings over the near term,” the analyst said.

Against this bearish sentiment, the big private equity chieftains laid out strong pitches to public investors on their fourth-quarter updates.

“Right now, you’re getting Blackstone on sale,” Schwarzman said January 28, when the firm’s stock traded at $25. Using modest projections for expected growth, he argued the shares should be valued at about $100 to $125.

Blackstone isn’t planning any buybacks partly because it prefers to hold onto as much cash as possible for acquisitions and investments in Blackstone’s own funds, Schwarzman said.

“If you look at the stock market, I mean, you have to conclude, it’s like the world ending,” Schwarzman said. “Well, I don’t think the world is ending. I think we’re going through an adjustment and people like ourselves who own long-term things and add enormous value end up at the end of the day being mega winners.”

KKR’s Scott Nuttall, who typically speaks on quarterly calls with analysts in place of firm co-chief Henry Kravis, said KKR has about $230 million left on its stock buyback plan.

“We think that this stock represents extraordinary compelling value at these prices,” Nuttall said on February 11.

He said the firm plans to continue using the buyback, “and then we will come back and let you know when we are ready to reload.”

Meanwhile, Black said Apollo’s shares remain “significantly undervalued.” The firm will buy back $150 million of stock in the open market and $100 million through a reduction of shares to be issued to employees to meet tax obligations connected to equity-based awards.

“The action should be viewed as a reflection of our firm belief that the current share price does not in any way capture the inherent strength of Apollo’s business model, growth prospects and long-term strategy,” Black said.

“Anywhere near our current unit price, our units represent an incredibly attractive value not only for public investors, but they also represent for Carlyle a highly accretive investment opportunity, and we have decided that we should take advantage of this opportunity while it exists,” Rubenstein said.

A day after those comments, Carlyle’s stock fell another 1.4 percent. 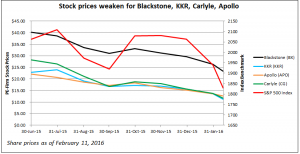