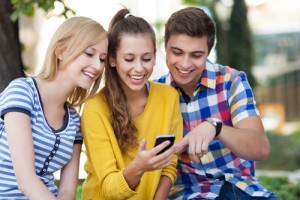 No surprise. All those fancy smartphones are outselling the basic feature phones. What this translates to is more app downloads, more mobile innovation, and, of course, more photo uploads.

How many photos are uploaded each day to Facebook and other social media sites? Check out this question on Quora to find out. One person says over 350 million photos uploaded to Facebook each day. I admit to contributing to a percentage of that. A small percentage.

Who’s buying all these smartphones? Likely it’s teens, such as my own son, who says he was too embarrassed to use his flip phone in high school. Another indicator of teen smartphone usage comes from Korea.

I’ve known Brian Wong of Kiip since he was a teenager, which was just a few years ago. VCs and everyone else I have met who know him speak highly of the entrepreneur, whose mobile adtech company has raised money from American Express.

Would you spend $100 on a Snoop Lion sticker? I haven’t bought any virtual stickers of any kind, but I have a lot of friends who have. They are not alone. Here’s the best sticker article on the trend that I’ve seen to date.

Are you ready for some football? Top-selling NFL jerseys. Go Niners! Colin Kaepernick’s #7 is #1.

I had no idea that the “Happy Birthday” song is copyrighted by Warner, and it is being sued over those rights. Meanwhile, the San Francisco Bay Area musical group Rupa & the April Fishes is the latest to file suit and argue that the song should be in the public domain.

The San Francisco Giants are in Washington, D.C., playing the Nationals for a three-game set. While I was watching the game last night, I saw some b-roll of the Washington Monument. Wow! While it’s undergoing repairs, it looks stunning at night surrounding by scaffolding and aglow with 488 lamps. Can we keep it that way?

Here’s my humblebrag for the week: Woe is me, I won’t be doing Second Opinion on Friday afternoon, since I’ll once again be participating in the annual Napa App Retreat hosted by appbackr. This includes a tour of the Hall Winery in St. Helena, Calif. It’s become my fave wine, not to mention it’s cool to check out the state-of-the-art facility, a LEED Gold Certified winery.

Photo of teens using a smartphone courtesy of Shutterstock.