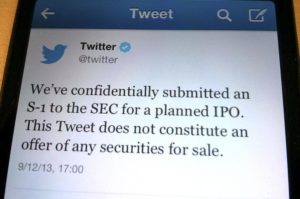 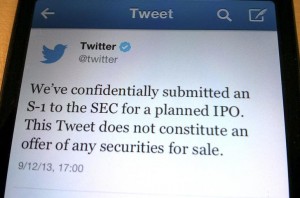 Retweet this: Twitter is finally going to IPO, as plans are quietly announced with, what else, a tweet. This is what everyone has been waiting for. Mark Zuckerberg has some IPO advice for Twitter.

The new iPhone release had a lot of buildup and hype in advance of the Tuesday unveiling. The reactions since then have been mostly “meh” from here to Beijing. Here’s The Guardian’s review of what I still consider an awesome piece of technology. And here is how T-Mobile’s life has changed since they started selling it.

If you were at TechCrunch Disrupt in San Francisco yesterday, then you saw on stage Tom Perkins of Kleiner Perkins Caufield & Byers and Don Valentine of Sequoia Capital. The San Jose Business Journal reports on 8 pearls of wisdom from the grandfathers of VC.

RIP Ray Dolby. The legendary inventor and sound pioneer passed away today at the age of 80.

We’re not quite in “Star Trek” territory yet. But NASA has confirmed that Voyager 1 has left our solar system to boldly go where no one (and no piece of earthly technology) has gone before..

PR people aren’t always behind the scenes. Today, Business Insider listed the 50 best PR pros in the tech industry. I could drum up my list of favorites I like to work with, but the BI list mentions a few people I know. Congrats to them all. In the interest of disclosure, though, I’d like to point out that Marc Andreessen is a personal investor in BI, as are numerous other firms and individuals. And that a few people currently with or have ties to The OutCast Agency (the PR agency that currently represents Andreessen Horowitz) are on the list, including Margit Wennmachers, a partner at AH and co-founder of OutCast.

On Tuesday, I had dinner at Palio D’Asti in San Francisco with several entrepreneurs, including Matt Bell of Matterport. The company has developed technology that takes and compiles 3D photographic images of interior spaces and objects. At the dinner, we all got to play around with the images on an iPad. Very cool! The company announced today it raised $2.8 million, giving it $10 million in total funding.

You may have noticed on your social media channels the 6 things that Arian Foster wants to teach his daughter. It’s touching and honest.

Tomorrow is Friday the 13th. National Geographic explains why the date scares us. However, I was born on the 13th and married on the the 13th, so I’m not one to suffer from triskaidekaphobia.

Photo: A tweet from Twitter announcing its IPO is shown in this photo illustration, Sept. 12, 2013. Twitter Inc has filed confidentially for an IPO, the company said on Thursday, taking the first step toward what would be Silicon Valley’s most anticipated debut since Facebook’s last year. REUTERS/Hyungwon Kang.