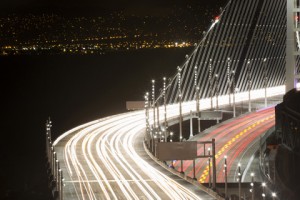 The new $6 billion eastern span of the Bay Bridge opened Monday night after 10:15 p.m. And at about 2 a.m. on Tuesday morning, the first DUI arrest occurred. The new Bay Bridge looks great, especially aglow at night, and it’s safer, too. I was living in San Jose when the Loma Prieta earthquake struck the region in October 1989 and state officials then decided to replace the old bridge. It took nearly 25 years, but worth the wait and I’m looking forward to driving across this engineering marvel.

A couple of struggling smartphone makers have come together, but Blackberry is not one of them. Instead, Microsoft buys Nokia for $7.2 billion, which means a new bridge in San Francisco costs less then all that Finnish technology! The Nokia deal doesn’t makes much sense to me. Shouldn’t Microsoft have stuck to its core business? And does one last deal under Ballmer’s reign make much of a difference? Is anyone going to buy Blackberry?

Speaking of Ballmer, prior to the Nokia deal, my colleague Mark Boslet posted a story listing Microsoft’s 41 venture-backed acquisitions under Ballmer’s tenure as CEO. (For VCJ subscribers only.)

Are you an Android user? I used to be, which means I’m not affected much by the news today that the Android 4.4 OS is being named after a crispy chocolate wafer. Definitely opens up new opportunities for candy swag. Worth checking out is kitkat.com. Still, many more top apps are available on iPhone.

Forget Microsoft, Blackberry, Android and Nokia. If all you care about are iPhones, then you already know that Apple will unveil the new models a week from today.

PC shipments down. No surprise! But IDC has “modestly lowered” its expectations for tablets, too? The reason is that wearables are catching on fast. And, Broadcom wants to take advantage of that wearable trend.

Do you think European venture capital is not as good as the United States? Here’s a short article from the Economist about three tech investors from the other side of the Pond. I could do without the TC reference at the end, but the story underlines to me that no matter how encouraging the deals and exits of European VCs may be, they are still viewed as small compared to their U.S. counterparts.

Are you ready for some football? It’s amazing how much content and analysis is created over the upcoming season, which hasn’t even kicked off yet. Here’s a rundown I saw today of teams on the decline.

You’ll pretend you don’t care, but maybe you have family or friends that do. Harry Connick Jr. and Jennifer Lopez join American Idol.

Informal Poll. I know we’re not even into Q4 yet, but we’re quickly winding down the 2013 year. Tell me, what do you think so far has been the venture capital story of the year? Multiple responses are OK. Email me and let me know.

Photo of long exposure of cars driving across the new eastern span of the Bay Bridge taken Sept. 2, 2013. REUTERS/Stephen Lam.