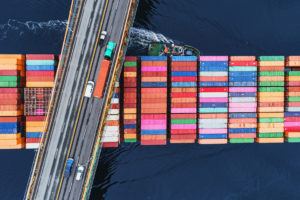 For many years, the big trend in the supply chain was to go global. But over the last two years, serious weaknesses in the strategy have been revealed. Now the pendulum is swinging the other way, and the supply chain is becoming more local. Private equity firms are seizing the opportunities to invest in companies that aim to minimize supply chain disruptions, nearshore parts and services and leverage technology to create more efficient and cost-effective approaches. To learn more about PE supply chain strategies, PE Hub spoke with several investors and consultants.

The regionalization of the supply chain is one of the themes that KKR partner Henry McVey wrote about in the firm’s recent State of Play report. “The high-water mark for globalization came in 2008, when global merchandise exports as a percentage of global gross domestic product reached nearly 27 percent,” he said, pointing to IMF data. “By 2021, that had dropped to 19 percent.”

On the deal side, one KKR example that bears out the trends is the firm’s minority investment in Körber’s supply chain software business, announced in December. In the deal announcement, the companies talked about trends including “increasing warehouse automation and supply chain localization.”

The weaknesses in the global supply chain have been glaringly apparent.

“We had the pandemic, we had the shutdowns, there was the Ever Given blockade in the Suez Canal, there are shutdowns in China because of covid,” TBM Consulting Group vice-president Ken Koenemann explained. “We are seeing the Ukraine-Russian conflict, and these are all factors that are impacting major elements that go into lots of goods and services around the world.”

In the past, the typical supply chain approach for PE firms was to find countries where labor and other costs were lower and relocate manufacturing portfolio companies, Koenemann noted. Initially, PE-backed companies relocated manufacturing to Mexico, then China and later to South Asian countries. But over the last two years, PE firms and their portfolio companies have been burned by exorbitant shipping costs, the snarled global supply chain and squeezed supplies. Recently, they have begun to buck the decades-long offshoring trend and are now turning back to North America as local suppliers and manufacturers become competitive.

For example, business is reportedly booming at MiddleGround Capital-backed Alco Manufacturing. Based in Elyria, Ohio, Alco makes hydraulic connectors as well as steel products and other industrial fittings. Customers who previously relied on offshored supplies “came to us, and we were able to manufacture the products locally and get the business back,” said MiddleGround founding partner John Stewart. “Demand has increased – not a little, but a lot.”

“The pandemic caused major disruptions in the global supply chain and revealed an acute need for transformation and innovation to strengthen operations and build long-term resilience,” found a report by Pitchbook.

From big deals such as the Thoma Bravo acquisition of Medallia for $6.4 billion in October last year, KKR’s investment in Körber’s supply chain software business and other modest deals closed in the mid-market, the regionalization of the supply chain is increasingly becoming strategic.

“People are beginning to realize that supply chains can really get whipsawed quickly,” CORE Industrial Partners founder and managing partner John May said. “The whole supply chain is getting compressed, and I think we will continue to see that accelerate the amount of potential reshoring being done.”

“We are seeing the benefits of reshoring or onshoring across our portfolio pretty significantly,” CORE’s May said. “It’s a thesis that we started looking at four or five years ago as an enabler of the Industry 4.0 trends, and we began to take positions around Industry 4.0 that are now benefiting because of these onshoring trends.” (Industry 4.0 refers to the digital transformation of manufacturers.)

Other firms are concentrating on infrastructure, such as Investcorp and Trilantic North America’s recent investment in RoadSafe Traffic Systems, a Chicago-based provider of traffic control and pavement-marking services. Another example is Wind Point Partners and Oaktree Capital Management’s $710 million investment in STG for the acquisition of XPO Logistics intermodal services in March. The packaging industry has also witnessed a series of investments that shows the growing appetite in strengthening the local supply chain.

Lindsay Goldberg, a private equity firm that has a variety of industrial manufacturing companies in its portfolio, is diversifying its sourcing. “You may get 99 of the 100 parts, but you can’t complete the order,” said managing partner Michael Dees.

According to Dees, the strategy at Lindsay Goldberg is to find more alternative sources from other locations without completely cutting out the Asian suppliers. Dees said investments that benefit from nearshoring and onshoring are doing well but warned that success doesn’t happen overnight.

“Part of the reason why companies went to Asia was tied to cheap labor,” Dees explained. “Labor rates in the region have increased as these countries have developed economically. The average wage and the average cost of production in China is significantly higher today than it was 20 years ago, and so the benefits have been significantly compressed.”

CORE has reshored some of the procurement. “As a broad portfolio, we have certainly localized procurement to the US because of the constraints that have happened, whether in logistics or pricing,” said May. “Some of the domestic suppliers are actually as competitive as international suppliers because of the challenge that you have between supply and demand balance globally.”

OpenGate Capital managing director Josh Adams said it’s become much more expensive to ship containers from Asia, with the 20 equipment unit price increasing from $3,000 to $20,000, which has erased some of the incentives for offshoring.

“At a strategic level, we have worked to onshore our supply chains and to reduce our exposure to Asia, given cost, but more importantly lead times when shipping out of Asia,” he said. The amount of time that it takes for containers to arrive in the US from China has increased significantly as compared with the pre-pandemic era.

For MiddleGround, which has several manufacturing companies in its portfolio, add-on acquisitions became the strategy in the shifting trends, said Stewart. Among MiddleGround portfolio companies closing recent add-ons are Alco and Banner Industries, the maker of differentiated metal products.

As TBM’s Koenemann said, the last two years delivered “too many surprises.”

What’s certain about the future is that global supply chain disruptions will continue. And so will PE-backed deals that aim to minimize the weaknesses and localize the processes.

Editor’s note: An earlier version of this article misattributed the quotes from TBM Consulting Group to the wrong executive. Ken Koenemann was the source of the quotes.