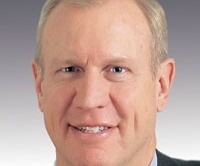 Bruce Rauner turned lunch into a pep rally for the buyouts business Friday at the Wharton Private Equity & Venture Capital Conference. He was passionate, he was funny, he was profane. He was a hoot.

“We work in the greatest industry in the world. We create jobs. We create wealth. We build companies,” Rauner, the co-founder and chairman of Chicago buyout shop GTCR, told a group of some 600 buyout pros and college students in a presentation that mixed humor — and not infrequent cursing — with his evident enthusiasm for the industry.

Rauner asserted that the industry has not done enough to sell its positive aspects to the larger marketplace. (It’s true, by the way; I have covered LBOs since the mid-1980s as a journalist, but until I started working at Buyouts Magazine in 2010, I never gave two thoughts to private equity as a financial industry of its own.) Rauner said that this failure to communicate constructively goes all the way to the language PE pros use to describe what they do. “You might call them portfolio companies. I call them management partnerships.”

A pioneer in the buyout business — Rauner said his partner Stan Golder invented the term private equity in 1978 — the firm raised $60 million for its Fund I and invested across a variety of industries and investment strategies. Times have certainly changed; Fund X closed last year at $3 billion, and the firm has focused increasingly on specialized industries, such as health care, media and business services.

GTCR tends to stay away from industries with low barriers to entry and low customer loyalty, such as gas stations or laundromats — “there’s usually a reason an industry is fragmented,” he said — but one example of the firm’s strategy, and the only investment he discussed in any detail, was Coin Mach Corp., a Charlotte, N.C.-based operator of laundry rooms in apartment buildings — 10 in Philly alone, he said.

Now an apartment building laundry room may look like a street corner laundromat, but it’s a way different animal, he said. For one thing, the service is outsourced under long-term contracts, and the laundry room has something of a captive audience in the building’s residents, who want to be able to do their laundry on a Sunday afternoon, when it’s raining, in their pajamas.

It’s also cheap to grow the business, by buying out a local competitor, adding the new locations to an existing service route (and firing the former competitor’s staff, keeping maybe the top two or three sales guys–yep,, he said that). The strategy worked, he said, drawing the biggest laugh of the afternoon: By the time GTCR exited the business, it was pulling in $480 million in annual revenue and $140 million in EBITDA, “all of it in fucking quarters.”

These days, Rauner is spending less time on the business–he stepped back in conjunction with the raise for Fund X–and more on a new passion: Trying to reform the Chicago public schools. He had kind words for Rahm Emanuel, the city’s “socialist” mayor, and he spoke eloquently of the opportunity to change the lives of the city’s young people by improving their schools.

It’s the same thing, in a sense, as running a business. GTCR maintains a stable of executives for companies that it backs; one executive has worked at three GTCR companies, Rauner said. “He worked harder at 76 than he had at 52.”

But it’s not about the money, he said. “It’s the love of the game. It’s the will to succeed. It’s the drive to be the best, and the money follows.”

For an industry that has been beset by criticism of Mitt Romney and the way he made his money, somebody ought to put this guy on the road as a spokesman for private equity.