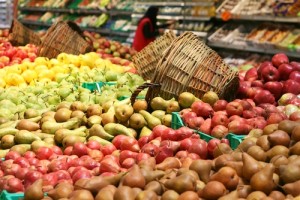 (Reuters) – Cerberus Capital Management is working on a takeover bid for troubled supermarket operator Supervalu Inc. and has held talks with lenders to line up financing, according to three sources familiar with the matter.

Debtwire earlier reported that the private equity firm was pitching a handful of banks to arrange $4 billion to $5 billion in debt financing to back a bid, sending Supervalu’s shares up 30 percent on Monday.

JP Morgan Chase & Co and Bank of America are among the banks considering a syndicate, Debtwire said.

Cerberus and Bank of America did not immediately respond to requests for comment. JP Morgan declined to comment.

Supervalu, which owns chains including Jewel-Osco, Save-A-Lot and Albertsons, declined to comment beyond what it said last week, that it has received several indications of interest and was in “active dialogue” with several parties.

A Supervalu spokesman said there can be no assurance that the process will result in a deal.

Interest in Supervalu also came from other investment firms, including Yucaipa Cos, KKR & Co (KKR.N) and TPG, who were looking at the company’s parts, Bloomberg reported earlier this month.

Cerberus was believed to be the only party looking at the company as a whole company, two of the sources told Reuters. They added that Supervalu’s management preferred to sell the company outright rather than break it up.

The financing package under current consideration includes an equity check of $800 million to $900 million, with the rest coming from debt, according to Debtwire.

Supervalu shares were up 66 cents, or 30 percent, at $2.85 on the New York Stock Exchange in early afternoon trade.