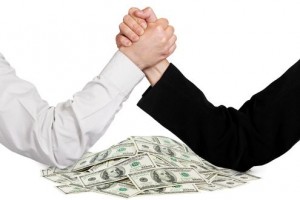 (Reuters) – Dell Inc founder Michael Dell on Wednesday raised his $24.4 billion bid by $150 million but the sweetened offer is contingent on a key change to the shareholder voting rules that will make it easier for him to take the No.3 personal computer maker private.

The sweetened $13.75 per share bid by Michael Dell and private equity firm Silver Lake came hours before a rescheduled vote on the buyout proposal, which has drawn strong opposition from major investors including billionaire Carl Icahn and Southeastern Asset Management.

The shareholder meeting on the deal will now be held on Aug 2.

The new proposal from the founder and his backers hinges on Dell’s special board committee changing the rules of the voting such that the buyout will pass if the majority of votes cast by shareholders is in favor of it. Currently, the voting rules state that a share not cast in the election counts as a “no” vote, which has proven to be tough to overcome.

Dell’s special committee said it was evaluating the new proposal.

The committee is seeking at least $14 per share from the buyout group in order to consider a potential change in the voting terms, a person familiar with the matter said. The committee might not endorse the proposed change even if Michael Dell agreed to bump to $14 or more, the person added, declining to be named because of the confidential subject matter.

Shares of Dell were flat at around $12.88 early on Wednesday.

“According to our latest tally, approximately 27 percent of the unaffiliated shares have not yet been voted. The presumption that these shares should be treated as if they had voted against the transaction is patently unfair,” Michael Dell and Silver Lake said in a statement Wednesday.

The votes that have come in so far are split evenly between yes and no, according to people familiar with the matter. That means those who abstain from voting can determine the outcome.

The buyout group believes it can get the votes to pass the deal if Dell will count just the shares that have been voted, a second source familiar with the matter said. The source added that the provision of counting non-votes as a “no” was accepted reluctantly by the bidders as it sets a very high threshold to meet.

While the new offer from the group expires at 6 pm Eastern Time on Wednesday, it is likely to be extended if needed.

Icahn, who has amassed an 8.7 percent stake in Dell, is leading a charge with Southeastern against the buyout with an offer of his own. He has not yet made any comment on the raised bid. An Icahn spokeswoman did not respond to a request for comment.

Icahn and others have said Michael Dell’s deal undervalues the world’s No. 3 personal computer maker.

INVESTORS OUTRAGED
The new offer, with its proposed change in voting rules, did not come as good news to everybody.

“Certainly the 10 cents wouldn’t sway anybody so they have to change the rules, and if the special committee goes along with this, it would be a travesty,” Pzena said.

Another investor said the new offer is not really a bump.

“Adding the qualifier means shares that don’t show don’t count where previously they did.”