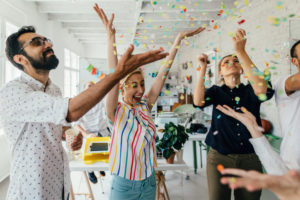 We’ve got a couple of great interviews for you this morning, one about making deals in Europe and the other about founding a private equity firm in Chicago.

Plus, we’ve got some exciting news of our own to share.
Buyer’s market? Craig McGlashan spoke with Karsten Langer, managing partner, Riverside Europe, about the changing landscape for PE deals in Europe.

“The pendulum is swinging a bit from being an extreme seller’s market – probably the best seller’s market, frankly, that anybody in our industry has ever known – in the last 18 months to being a more balanced market,” Langer said. “Maybe it will even become a buyer’s market.”

Last month, Riverside sold Brookson Group, a compliance and business services platform based in Warrington in the UK, to TPG-backed People2.0. It was part of a string of exits by Riverside Europe but one that came as the company looks more at purchases.

“We made the decision at the beginning of 2021 to focus on exits quite a lot,” Langer told Craig. “Just from my fund in Europe, in the last year we did one IPO and five trade sales. On the other hand, we had a hard time buying things while remaining disciplined on pricing. That is shifting a bit now. We’ve announced two investments this year so far.”

Langer described some of the opportunities for PE buyers in Europe now.

“Companies that have a lower downside, maybe because they sell products that consumers really need day in, day out – like food and medicines and so on – are going to be more sought after,” said Langer.

Technology is particularly attractive because it offers a double whammy for investors, both in terms of price and resilience to a downturn in the economy, said Langer.

“The trend winds in favor of technology won’t change with a recession,” he said. “That software is eating the world and everything’s becoming tech enabled is not going to change just because there’s a recession for a couple of quarters. Investors will be savvy enough to understand that you can at that point invest in technology and maybe make some of the best investments of your career. Not because they’re going to be dirt cheap, but they’re going to be relatively cheaper.”

“PE Hub Europe extends the renowned and respected deal coverage of PE Hub to the European market by leveraging the unrivalled access and knowledge of PEI Group,” Craig said. “Its mission is to get to the heart of the European private equity landscape by analyzing deals and the direction of the market and telling the stories of the people and firms making it all happen.”

The introduction of PE Hub Europe, PEI Group’s third new-product launch in the last 18 months, reinforces the company’s position as a comprehensive provider of information and insight on the world of private investment.

It comes at a time of vital importance, with record levels of dealmaking occurring against a backdrop marked by uncertainties both economic and political. PE Hub Europe will be your guide in these complex times and through whatever conditions lie ahead.

Check out the new site at pehubeurope.com, and send us your deal news, story tips and feedback! Send email to Craig at craig.m@peimedia.com, Nina at nina.l@peimedia.com, David at david.wansboro@peimedia.com and me at mk.flynn@peimedia.com.

Women in private equity. On the US site today, we’ve got a terrific interview for you to read.

Every spring, the editorial teams at PE Hub and Buyouts profile 10 outstanding women in private equity. Over the years, we’ve featured 60 women dealmakers.

This summer, we’re catching up with some of them to see where they are now.

When we featured Suzanne Yoon back in 2016, she was the managing director of transaction development at Versa Capital. The next year, Yoon went on to found Kinzie Capital Partners, a Chicago-based PE firm that invests in lower-mid-market companies in the manufactured products, business services and consumer industries. In 2019, Kinzie acquired Colony Display, and in 2020, Kinzie invested in Chelsea Lighting.

While the volume of women in private equity is increasing slowly but surely, the number who are firm founders is still low. PE Hub assistant reporter intern Tara Lindenbaum asked Yoon to outline the path she took and share her advice for others who may want to follow in her footsteps.

How did you become interested in private equity?
It was Pretty Woman and Wall Street. Those were my first two exposures, having come from an immigrant family. I’m a product of 1980s and 1990s movies, so the first time I heard about the concept of private equity was in Pretty Woman. Richard Gere’s character, looking back, that’s what he did. Then I also grew up and had friends whose fathers were CEOs. I was always interested in my own financial independence. And I knew if I went to Wall Street or banking, that was a path. So, in a lot of ways, I kind of fell into private equity, and I was exposed to and fell in love with the buy side of private equity when I started working at ABN AMRO Bank.

What inspired you to start your own PE firm?
I always had a desire to control my own destiny, and I saw an opportunity, particularly for lower-mid-market companies in the Midwest, to bring technology advancement and digital innovation to help them continue to grow. And then I found the right partners, my co-founder David Namkung, and his company that he also founded, Clarity Partners, to support my investment thesis.

Hollie Haynes (Luminate Capital), Adele Oliva (1315 Ca) and Tiffany Kosch (CenterGate Capital): they were three women that I saw start firms before I did in the buyout and growth space, and I really respect all of them. Just seeing them start their own firms made me feel a little more emboldened too.

What investment are you most proud of?
For us to date, it was our first platform investment: Colony Display. It was a big milestone for our team, and it has done exceptionally well. We had the benefit of partnering with a young but innovative and hungry management team, which aligns well with our culture. It allowed us to showcase our investment thesis and our culture, and how that really translated into returns. Colony has a lot of momentum and is poised for continued, sustainable growth. They’ve consolidated locations into a larger facility, have done an excellent job integrating an add-on acquisition last year, and have overcome the various disruptions and labor shortages of the last couple of years.

That does it for today’s jam-packed Wire!

PE Hub’s Aaron Weitzman will write tomorrow’s Wire, and Buyouts’ Chris Witkowsky will be on duty Wednesday. I’ll be back on Thursday.

Until then, happy dealmaking,
MK