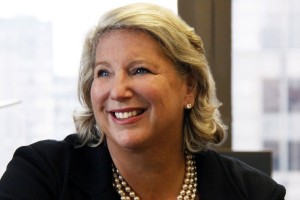 The goal of Pam Hendrickson, COO of The Riverside Company, is to stop the bashing of private equity.

The latest salvo came from a surprising source — the business news network CNBC. On Monday, Joe Kernen, a “Squawkbox” co-anchor who is known for his pro-capitalist leanings, was discussing Former Treasury Secretary Tim Geithner’s move to Warburg Pincus, and why he has a problem with private equity.

“I didn’t until I saw that election,” he said. “And then I realized what job killing, dividend-paying scumbags the entire industry was. So now, yes I do have a problem. And I just think it is rich that now the former Treasury of Secretary can go to the place where it was totally vilified to win an election.”

A CNBC spokesman said that Kernen’s comments were part of playful banter between the anchors. (Walter Isaacson, who took part in the “banter,” was a guest that day and isn’t a Squawkbox anchor.)

Hendrickson, who spoke Tuesday at Riverside’s yearly lunch, said Kernen’s comments were reckless, and she was surprised he made them on the business-friendly show. “I found it more disappointing that someone who is usually as informed as Joe Kernen would make a comment like that which has no factual basis,” she said.

Kernen tweeted that he was trying to defend PE with his comments. “It was directed at the way [Democrats] portrayed [PE] in 2012,” Kernen said in the tweet that was seen by peHUB. “Obama hammered Romney, then Geithner joins Warburg.”

The comments are the latest in PE’s image problems. The secretive industry is known for making billions of dollars by buying and selling companies. Criticism can be scathing: buyout shops “are job destroying vultures who scavenge the meat from American companies and leave their carcasses by the side of the road,” the New Yorker magazine wrote in January 2012.

Congressman Jim Himes asked Hendrickson, at the end of 2011, whether there was any data showing that PE firms were actually “job killers.” There wasn’t. Hendrickson, who became chair of ACG in September but previously served as vice chair, is trying to change the perception of private equity.

“My mission is to continue to educate people as to what PE is and what it does,” she said.

The Association for Corporate Growth, in cooperation with the Edward Lowe Foundation, The Institute for Exceptional Growth Companies and PitchBook Data, released a report earlier this year that compared sales and job growth data at private capital-backed U.S. companies with the broader universe of U.S. companies in the 15-year period from 1995 to 2010.

The study showed that the number of private capital-backed companies grew 91 percent to 23,211 by 2010. These PE-backed businesses created nearly 3 million jobs in 2010, up from 1.8 million in 1995, a 64.4 percent increase. An ACG spokeswoman said the data showing how many jobs were created by the bigger universe of U.S. companies in the period was unavailable.

She cited the example of Riverside, a lower middle-market PE firm, which has invested $1.8 billion in 200 U.S. companies. Since 2010, Riverside’s portfolio companies have created 1,500 net new jobs, Hendrickson said.

The perception of the industry has begun to change, she said. When she goes to Washington nowadays, more people understand what PE does and that the industry did not cause the financial crisis.

“They are seeing that PE guys are not all bad. That the capital is really important to driving the growth of small business in the U.S. and around the world.”