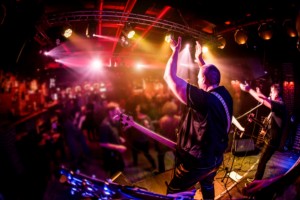 Way back in the mists of time, in an era called the 1980s, a rock band called Tesla was all the rage among the kids.

This was a time of big hair and fast cars, when some musicians donned make-up and Spandex and sang about sex and drugs and everyone seemed to be having a lot of fun. Tesla helped define this era, selling around 14 million albums in the United States.

Today, Tesla is still around (as I recently discovered) making albums and touring. Earlier this year, the band sold 100 percent of the publishing for its entire music catalog to a music royalties-focused private equity firm called Round Hill Music.

Round Hill will collect royalties on Tesla’s songs, including potential royalties outside the U.S. the band may have neglected, and will work to find placement opportunities for the music in commercials and movies. While Tesla sold its publishing rights to its music, it still retains something of a minority interest through songwriters’ rights, Joshua Gruss, chairman and chief executive officer of Round Hill Music, told me in a recent interview.

“The writers’ half is like a passive share, so song writers look to us as a creative group that they think can do a good job getting better value” out of the catalog, Gruss said.

This is Round Hill’s business model, and the firm just closed its debut fund on $202 million to pursue the strategy. Round Hill Music Royalty Partners has been in the market since at least January 2013, according to filings with the U.S. Securities and Exchange Commission.

Round Hill also collected an additional $7.4 million for co-investments, the firm announced.

Fund I is charging a 2 percent management fee and a 20 percent carried interest rate, along with an 8 percent preferred return, according to the materials.

The firm is run by Gruss, who formerly worked at family office Gruss Asset Management, as well as Bear Stearns & Co and Warner Music Group; Richard Rowe, vice chairman, who formerly worked at R2M Music, Sony/ATV Music Publishing and Sony/Music CBS; and Neil Gillis, president, who was previously a managing director and head of publishing at Alfred Music Publishing. Jennifer Scher, chief financial officer, was formerly CFO of Spirit Music and director of corporate finance at EMI Music Publishing. The executive team is supported by 13 other professionals.

The royalties group was first incubated within the Gruss family office in 2010 and already has committed or invested more than $60 million in 20 music catalogs, with more than 10,000 songs. The songs are diversified by artist, genre and musical era and include songs from The Beatles, The Rolling Stones, Frank Sinatra, Billie Holiday, Ella Fitzgerald, Miles Davis, James Brown and Bruno Mars.

For example, one portfolio the firm acquired from GIL/GPS, a family-run publisher in New York City, includes six Beatles songs: “She Loves You,” “I Saw Her Standing There,” “From Me to You,” “Misery,” “I Wanna Be Your Man,” and “There’s a Place.”

While collecting royalties is the passive side of the investment, the firm also actively tries to place some songs. Some examples include the song “Best Day of My Life” by American Authors, which Round Hill has licensed for more than 100 different uses. Placements range from a trailer for the Disney movie “Earth to Echo,” to a Turkish Nescafé commercial, to a Hyundai commercial in France, Gruss said.

“There’s a reason that song is so successful from a licensing [standpoint]; it’s called ‘Best Day of My Life.’ It can be used in anything. All these brands want uplifting, happy, positive songs,” Gruss said.