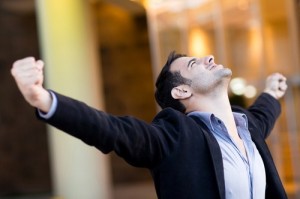 Joel Pinel, the owner of Moosejaw, Saskatchewan-based WOW Factor Media, a print media design and marketing company, has won the 2013 BDC Young Entrepreneur Award, sponsored by the Business Development Bank of Canada. The award, which comes with a $100,000 grand prize, was won by Pinel for his Equipment Edge project. The public selected the winning project from among nine finalists through online voting.

Joel plans to capture a piece of the booming building market by equipping WOW Factor Media with the technology needed to manufacture directional and custom-built signage for high-rise buildings. In-house production of signs for units currently under construction will give the print and marketing company an opportunity to get in on the ground floor of this burgeoning market and gain a competitive edge.

“Winning this prize is massive for our business,” says Joel. “I’m overwhelmed and so grateful for the support we received from Saskatchewan and all our loyal fans. The exposure we gained was just incredible and has already accelerated our business. I recommend participation in the contest to entrepreneurs across the country!”

“I congratulate Joel on being the 2013 BDC Young Entrepreneur Award winner,” says Michel Bergeron, Senior Vice President, Marketing and Public Affairs at BDC. “I’m sure he will infuse his project with the same energy and creativity he has brought to building WOW Factor. Participation in the contest has helped him gain exposure for his business and polish its reputation. The grand prize provides the opportunity to build on that success and propel the business into the big leagues.”

“We will use the $100,000 grand prize to increase our scope by purchasing new equipment,” says Joel. “This means we will be able to increase revenues and reduce costs while maintaining full control of the production process and keeping our customers happy. The new equipment will give us the opportunity to fast forward our business, grow more quickly and employ more people.”

The contest runner-up, recipient of $25,000 in BDC consulting services, is the project Brand Endeavor, submitted by finalist Max Jenke of Endeavor Design in Vancouver, British Columbia.

Nine projects competed for Canada’s votes in the 2013 BDC Young Entrepreneur Award online voting contest, which ran from May 22 to June 11. The following finalists described, via video, a turning point their company has reached and their solution to achieve future growth and success: