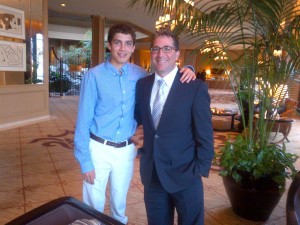 Andrew Sheiner, who is leaving Onex Corp. after 17 years, will officially launch his new firm, Altas Partners, on July 1.

Toronto-based Altas will have a “different orientation,” says Sheiner, who spoke Tuesday at the Buyouts conference in Chicago. Altas will seek to acquire high-quality North American businesses and act “as an owner,” says Sheiner, who officially leaves Onex on Saturday.  “We will seek to hold those businesses for a longer term if they have the potential to continue to generate attractive risk adjusted returns,” he says.

This can be longer than 10 years or shorter than five, he says. “Whatever is most sensible for that business,” he says.

Altas, which currently has a staff of five, will also be hiring, Sheiner says. He expects to have 7 to 8 executives, including some former coworkers, on board by Labor Day.

Another difference? Altas will be offering potential LPs a “different fee structure” with the goal of generating greater long-term risk adjusted returns, Sheiner says. However, he declined to disclose what the fee structure will be at Altas. “We’re still working on it,” he says.

Sheiner, who spent the last decade overseeing ONCAP, Onex Real Estate Partners and Onex Credit Partners, says investors are increasingly “uncomfortable” with the large number of sponsor-to-sponor deals taking place. Roughly half of current private equity-backed M&A involves such transactions, he says. “That involves the churning of businesses from one firm to another,” he says. GPs are driven to sell companies in order to get compensated and that model can be inconsistent with the long-term objectives of owners, Sheiner says.

It is this conflict that has driven Sheiner to create a “new” type of PE firm. Altas will seek to impose a more “modest fee structure” and, by using less leverage, retain ownership of companies longer. In this way, Altas hopes to achieve the same net return profile as other PE firms but with lower gross returns and less risk, he says.

“We’re taking the Berkshire Hathaway model and applying it to PE,” he says.

Altas will seek mainly majority positions and look to invest in companies headquartered in the U.S. and Canada. The PE firm will focus on most sectors but not natural resources or high tech.

As a new firm, Altas will be fundraising but this won’t necessarily be for a fund, Sheiner says. Altas will be targeting a “pool of capital” of roughly $1 billion, he says. The PE firm will be established with five to 10 large institutional investors that are “like minded” and “keen to work with a partner that has Altas’ orientation and approach,” Sheiner says.

Photo of Andrew Sheiner, and his son, Lucas, who is Bustasports.com’s CEO, courtesy of Altas