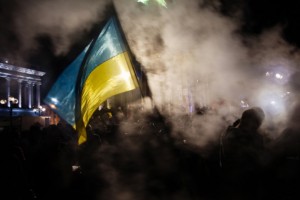 Not everyone has the stomach for investing in Russia or Ukraine.

Jay Jordan, founder of Chicago buyout shop The Jordan Company, recently warned people away from what he called a “corrupt” country. Jordan told The New York Post, “We got out in 2006. Russia’s not a place to put in any money now.”

But that’s not the view at Siguler Guff & Co, the New York City-based private equity asset manager with interests in a number of emerging markets, including Russia.

The firm has been active in the region since the 1990s and has seen some hairy situations. “This is not the first time we have faced a crisis,” said Kathryn Kantarian, a spokesperson for Siguler Guff. “We take a long view, and believe that short-term problems have the potential to generate long-term opportunities.” She added: “We are of course monitoring the situation.”

One of the firm’s portfolio companies is EPAM Systems, a software service provider in Central and Eastern Europe.

In an 8-K filing with the U.S. Securities and Exchange Commission, EPAM Systems said it has delivery centers in Ukraine employing 2,600 engineers, none of which are located in the Crimea region. Russia has landed troops in Crimea to take control of military bases it keeps there. EPAM Systems also has delivery centers in Russia employing about 1,300 people, according to the filing.

The company said it is monitoring the situation, and has contingency plans that include relocating employees elsewhere or even adding new locations.

“We have no way to predict the progress or outcome of the situation, as the political and civil unrest and reported military activities are fluid and beyond our control,” EPAM Systems said in the filing. “Prolonged unrest, military activities, or broad-based sanctions, should they be implemented, could have a material adverse effect on our operations.”

The situation in Ukraine hits home for me. My grandparents and relations on my father’s side were dragged and herded from their homes in the Ukraine by the Nazis and thrown into labor camps (lucky for them and me). The story in our family, which may be apocryphal, goes that my grandparents met when my grandmother and a bunch of girls in the village near the labor camp would take fruit to the male prisoners.

Eventually, the girls were caught and thrown into the camp as well. My grandparents fell in love at some point, were eventually liberated, and emigrated to the U.S. – where, at Ellis Island, they gave my grandfather a choice: be a steelworker in Pittsburgh or a miner in Montana. He chose Pittsburgh and that’s why I’m a Pittsburgh sports fanatic today.

That’s a long-winded way of explaining why I feel for the people of the Ukraine and hope this situation gets resolved without a full-scale invasion.