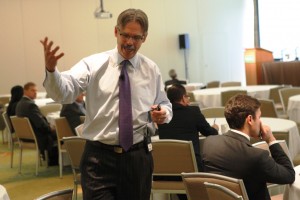 (Reuters) – Dell Inc.‘s board is bending over backward to prevent any appearance of conflicts of interest as founder and Chief Executive Michael Dell tries to lead a buyout of the world’s No. 3 PC maker.

But its attempts to do right by Dell shareholders means that if the proposal fails, there will be a substantial reward for Michael Dell’s partner in the $24.4 billion buyout bid, private equity firm Silver Lake, a source with direct knowledge of the situation said.

Under the terms of the agreement between the Michael Dell-Silver Lake group and Dell Inc., the group will receive a $180 million break-up fee if a rival comes up with a higher accepted bid, and both Blackstone Group LP and billionaire investor Carl Icahn are working to finalize rival bids.

This means that should a rival outbid Silver Lake, the entire $180 million breakup fee would go to the private equity firm, rather than the $45 million its equity contribution would suggest. That breakup fee would be split roughly evenly between its managers and investors, also known as limited partners, the source said. And Dell would separately also reimburse Silver Lake up to $25 million more for deal-related costs.

A Dell spokesman declined to comment on behalf of the company or Michael Dell for the purpose of this article, as did representatives of Silver Lake, Blackstone and Icahn. Michael Dell himself could not be reached for comment.

If a superior offer for Dell materializes Silver Lake will have a decision to make: Raise its offer — with or without an additional contribution from Michael Dell — or walk away. The decision would become more complicated if Michael Dell had also become part of a rival offer.

Silver Lake has already raised its contribution to the bid a number of times during the course of the negotiations, according to a regulatory filing.

Private equity experts say that they do not believe that Silver Lake would turn down a deal for a break-up fee.

But if a private equity firm’s managers receive a large part of any such fee it could raise questions about whether their interests were properly aligned with their investors, said Steven Kaplan, a University of Chicago finance professor whose research focuses on private equity. Keeping only 20 percent of a break-up fee is more common among fund managers than keeping half of it, Kaplan said.

The International Limited Partners Association, which represents private equity investors, has suggested as much in its guidelines.

“There is an interesting dilemma here,” said David Fann, chief executive of TorreyCove Capital Partners LLC, a private equity advisory firm. But he added, “People don’t go into a deal for the break-up fee. People usually think there is a legitimate investment underwriting case for them to make more than two times their money.”

Of course, if the Michael Dell-Silver Lake team succeeds in its bid and manages to turn around the fortunes of the technology company, which has expanded from PCs into a broader range of technology products and services, then the payoff could be much greater for Silver Lake, its managers and investors.

If Silver Lake eventually manages to get 100 percent return on the up to $1.4 billion in equity it is planning on putting into the proposed buyout, its investors would see 80 percent of that, or $1.12 billion, and its managers 20 percent, or $280 million, based on a simple calculation of how profits are typically distributed in the private equity business.

Silver Lake’s three founders and four top executives usually get the biggest cut of any fees and investment gains that go to the firm’s managers. They do, though, also have some of their own money invested in their funds, so they would also benefit from the gains received by investors.

To be sure, there are no guarantees that Silver Lake would succeed in reversing Dell’s decline. It has faced falling demand for personal computers as the popularity of tablets and smart phone rises.