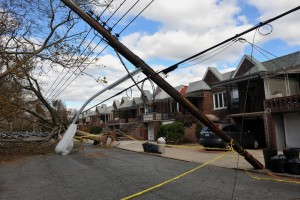 It’s been a week since Hurricane Sandy devastated the East Coast and damages could reach as much as $50 billion, according to the New York Times.

Losses due to Sandy are still being worked out. If they are $10 billion or less, primary insurers, like Chubb or Allstate or State Farm, will likely pay the brunt of claims, PE sources say.

As damages increase, payment will “disproportionately” fall on reinsurers, one PE executive says. “Overall it’s not a huge issue for the industry,” the PE exec says. “This is the kind of event the industry is structured to absorb.”

Jason Rotman, an Aquiline Capital investment professional, says reinsurers will kick in their share of Hurricane Sandy payments. “Money paid by the reinsurance industry will be ultimately very helpful in rebuilding the community,” he says.

What are reinsurers? Firms like Hannover Re or Ariel Re basically provide insurance for insurers. Such companies typically sprout up after large catastrophic events. After Hurricane Andrew slammed into southern Florida and south central Louisiana in 1992, causing $55 billion in damages, PE firms increased their investment in reinsurers.

This again happened in 2001 after the Sept. 11 terrorist attack ($99 billion in damages, according to U.S. News & World Report). Hurricane Katrina, considered one of the most destructive natural disasters in U.S. history, caused $157 billion in damages when it struck in 2005, U.S. News & World Report says. Katrina, as expected, spurred PE investment in the reinsurance space.

After such large events, people wanted to buy more reinsurance because they were more aware of hurricane risks, a second PE source says. This created a supply  and demand imbalance, the person says.

Hurricane Sandy, however, is not big enough to cause private equity to invest in more reinsurers, a different PE source says. “[Sandy] is not enough to create a supply and demand imbalance,” the person says.

Still, Sandy could provide some positive news for PE-backed reinsurers. Rates have been weakening and Sandy, at a minimum, will cause prices to stop softening, the second PE source says. Reinsurers will initially lose money because of the hurricane-related claims. The companies may be able to charge higher rates in the future, sources say. “Reinsurers could do better because of Sandy,” one banker says.

The second PE source cautioned that the industry is not happy Hurricane Sandy occurred. “People in Bermuda are not jumping for joy,” the source says.

Here’s a list of some major investors in the sector.

Stone Point has also invested in reinsurers like New Point IV, Alterra, PartnerRe and Wilton Re.

New York-based Lightyear, which manages about $3 billion in committed capital, focuses on financial services, including insurance. The PE firm has invested in Antares Holdings and Houston International Insurance Group. Lightyear also owns a stake in Flagstone Re, a Bermuda reinsurer. Validus, in August, agreed to buy Flagstone Re  for about $600 million in cash and stock.

In October, Lightyear agreed to take a controlling stake in Cooper Gay Swett & Crawford, a wholesale insurance and reinsurance broker.

Aquiline also invested in Juniperus Capital Holdings, a Bermuda reinsurer, in January of this year. Marsh & McLennan also recently invested. Juniperus is in the process of rebranding as Pillar Capital Management.

In terms of reinsurers, Blackstone’s deals include Ariel Re, Aspen, Axis and LaSalle Re. Goldman Sachs, in April, closed their buy of Ariel Re. (The Wall Street Journal valued the deal at less than $500 million.)

Berkshire has its own reinsurance group, run by Ajit Jain. Buffett’s company also owns General Re and reportedly has an 11.3% stake in Munich Re.