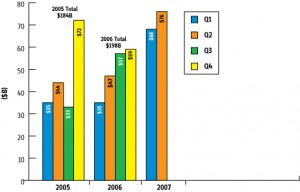 On their first day of fundraising last September, partners of start-up Excellere Partners sat down with executives at five prospective limited partners in Chicago, including funds-of-funds giant Adams Street Partners, whose thumbs-up might well have influenced other investors. All five took a pass.

Fortunately, the Denver-based spinout of KRG Capital went two-for-two the next day, and over the next six months managed to raise a $265 million fund. According to co-founder Rob Martin, the mid-market buyout shop tried to average about three meetings per day, and ended up with about one investor for every five meetings.

“There was a pretty high bar for first-time funds,” said Martin, whose firm is close to closing its first deal. “What they really want is a differentiated model, especially in the sub-$500 million range. The more defined your strategy is, the more comfortable the LP gets.”

The success of these first-time funds and small funds comes in the context of an overall market that is providing buyout firms with unprecedented amounts of capital. This year’s fundraising total has far outpaced last year, with $143.8 billion in total funds raised by U.S.-based firms, compared with $82.4 billion raised in the first half of 2006. The distribution of funds, by and large, has remained constant, suggesting growing appetite for smaller groups.

Typical of start-up firms is Industrial Opportunities Partners, which held a final close on its debut fund in June on $185 million. The Evanston, Ill.-based firm buys mid-market industrial companies generating revenues of between $30 million and $300 million. The firm went to the market in late 2005 and had its first close in June 2006.

“From our perspective it was a good time and a bad time to be raising,” said Senior Managing Director Kenneth Tallering. He said he was often told by investors that they had allocated all their money for a particular year, and that they could only commit to the fund if it were held open until the next year.

Nonetheless, prospective investors praised the firm for its industry focus and the fact that half of the firm’s partners have operating backgrounds, said Tallering, who earlier worked at Chicago-based TMB Industries.

Another debut fund to succeed this year was VMG Equity Partners, a spinout group from TSG Consumer Partners (formerly The Shansby Group). VMG Equity, which buys consumer products companies, has an alliance with Hollywood talent agency The Firm to help get stars to promote portfolio company products.

VMG Equity started fundraising in January 2006, and, like other start-up groups, met its share of resistance. “Certainly we know [investors] are out there that have become very large, who’ve chosen not to invest in smaller, middle-market funds,” said Mike Mauzé, co-founder of VMG Equity. “Three years ago some of these larger state pension funds might have been interested in a $300 million fund. Now they say you’re too small, come back when you’re larger.”

The firm closed its maiden fund on $325 million in June.

Smaller firms also continue to find an audience, in part because over the long haul their funds have outperformed other segments of the market. Through the end of 2006, according to numbers compiled by Buyouts publisher Thomson Financial, small buyout funds—those of less than $250 million—posted 20-year returns of 22.4 percent, compared with 11.8 percent for funds of $1 billion or more.

Small shops also have benefited from the recent success of mega-funds. “Successful small and mid-cap fundraisings have been fuelled by LPs flush with cash that are redistributing a portion of their recent winnings from larger funds into smaller funds,” said Terence Crikelair, co-founder of placement agency Champlain Advisors.

Buffalo-based Summer Street Capital is another. It closed on $187 million in commitments this spring, beating the $150 million target set for its second fund. Backing the fund are 52 limited partners, including insurance companies, banks, some funds of funds and state pension funds.

Summer Street, previously an SBIC fund, needed to replace the government as an LP. It began working with placement agent Champlain Advisors 18 months ahead of the fundraise, the firm told Buyouts. While the firm doesn’t have a specific regional or industry focus, by the time of its final close on the second fund, it had amassed a track record of 15 investments and 10 exits.

Where is the money coming from for these smaller funds? Some comes from managers of funds of funds, who tout their ability to manage a portfolio of top managers for investors too big, or too small, to do it effectively on their own. They include Parish Capital, Chapel Hill, N.C., RCP Advisors, Chicago, and Siguler Guff & Co., New York.

Several large pension funds have been also been showing an interest smaller funds. Last year, for example, California State Teachers’ Retirement System and California Public Employees’ Retirement System both hired Altura Capital of New York to compile a database of emerging managers with $600 million or less in assets under management.

Despite successes, firms raising maiden funds and small funds still must struggle to establish new LP relationships. “Money for new relationships has been dwindling at a larger pace than ever,” said Mac Hofeditz, partner at San Francisco-based placement agency Probitas Partners. “The bar to add new GP relationships is as high as its ever been.”

A number of such firms have had trouble raising funds. Some have disbanded, while others raised less money than they had hoped. David Fann joined as Chief Executive Officer of La Jolla, Calif.-based advisor Pacific Corporate Group‘s PCG Asset Management division after failing to raise a $100 million-targeted buyout fund under the name Inflection Equity Partners. Also on his team were ex-Platinum Equity Principal Douglas Robertson and an ex-principal with Crescendo Ventures, Subra Narayan.The firm reportedly had a relatively short track record of just seven deals in the relevant space.

“Raising a first time fund is probably one of the hardest things anyone could do. It all has to line up, similar to the moon and the stars,” said Fann. Fann added that while Inflection had some LP support, tech buyouts caught the fancy of a number of larger firms during his fundraise. “The uniqueness of the product dissapeared,” he said.

San Francisco-based Gryphon Investors initially listed $550 million as its “aggregate offering price” (an amount listed in form D filings that is typically the same as the target) in 2004 for its third fund of $550 million. It closed with $415 million last year, after a major LP told the firm to cap the fund at that level, according to a spokesman. LPs in the fund include State of Pennsylvania Employee Retirement System, Pomona Capital, SunAmerica and Thrivent Capital. The firm buys mid-sized, North American business services, consumer and retail companies.

Wafra Capital Partners, which raises all its money from the Middle East, stopped its fundraising at $135 million, after aiming for a $250 million target. The firm buys mid-market, niche manufacturing, consumer products and specialty services companies. Wafra Senior Managing Director Peter Petrillo said its stable of backers were looking mostly to write larger checks for funds raising $1 billion or more.

Cortec’s second fund had performed poorly, and the firm had only one realization out of fund III when Cortec approached LPs for fund IV, said Partner David Schnadig. While Cortec had made some personnel changes and 90 percent of its existing LPs reupped for the fourth fund, new LPs wanted proof that problems were over, he said. Since then, Schnadig and his team have righted the ship—Cortec’s fund III has returned 140 percent of the fund after just three realizations.

BlackEagle Partners, a 2005 spinout from turnaround buyout shop Questor Management, faced the dual challenge of raising a relatively small fund that was also a debut fund. Led by Michael Madden, the firm has now raised $130 million after being in the market much of the past two years. Its target range when it first came to market, $300 million to $400 million, has been scaled back to $250 million to $300 million. The firm completed its first deal, buying auto parts supplier Federal Broach & Machine Co., without a fund in December 2006; Apollo Management supplied much of the debt and equity.

Kevin Kester, in charge of raising a small-buyout fund of funds at Siguler Guff, said he estimates that only three out of five smaller funds that come to market hit their targets. The smaller the fund, Kester added, the harder the fundraise. In part this reflects the fact that executives raising larger funds tend to have longer track records.

“A lot of the people who aren’t successful you don’t hear from anymore,” said Kester. “A lot of them go back to investment banking or get absorbed into a new group.”