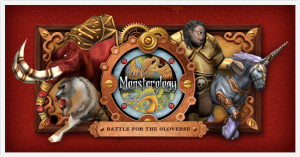 Nukotoys, a two-year-old San Francisco-based startup that often bills itself as “Silicon Valley’s toy company,” is in the market for $2.5 million.

If you haven’t come across it before, the company has developed interactive iOS apps that work together with trading cards it created in partnership with two well-known franchises: the Discovery channel’s wildly popular “Animal Planet” property, and “Monsterology” a book in a series of kids’ books by U.K.-based Templar Publishing.

Game play is activated by swiping cards against a device like an iPad, causing virtual animals like elephants and giraffes to materialize or else spring to life in the “Animal Planet” game. In the case of “Monsterology,” young gamers may find themselves interacting with griffins and other ghoulish creations that they’ve read about it in fables.

I know precious little about interactive kids’ games, but the physical cards seem certain to appeal to little card collectors The cards are also where Nukotoys makes its money. Whiles its two introductory games are free to download at Apple’s App Store, the cards come in packages of three cards for $1.99 and seven cards for $3.99 and will be available in two weeks’ time at “most of the major retailers nationwide,” says Nukotoys CEO Rodger Raderman. (Raderman, a serial entrepreneur who founded iFilm.com in 1998, declines to be more specific about those outlets, saying he’d rather wait until “the cards on are the shelf.”)

Raderman adds that for parents who don’t shop at big box stores, virtual versions are also available and can be purchased online through “Nuko Bucks,” the company’s own currency.

Judging by this promotional video, the games won’t dazzle adults, not that they necessarily should. The “Animal Planet” game is designed to appeal to kids ages 3 to 8, while “Monsterology” is expected to sell to children ages 7 and up.

As with many game makers, Nukotoys also has to pay both licensing fees to piggyback off other properties. (Raderman declined to discuss what percentage of sales Nukotoys has agreed to deliver to Discovery and Templar, respectively.) And the company’s games aren’t yet available on Android devices, though Raderman says they will be soon.

Still, the 15-person company seems to be making headway. Earlier this month, it won a startup tablet competition at VentureBeat’s MobileBeat event. Nukotoys has also attracted roughly $5 million from investors since its 2010 founding, most of which has “come in the form of convertible notes that we’ve been holding onto for a couple of years,” says Raderman.

Not last, Nukotoys has lured an impressive line-up of advisors to further its cause. Gordon Radley, who served as the president of Lucasfilm from 1992 until 2003, is among those who’ve signed on; so is Tom Kalinske, a former Mattel CEO.