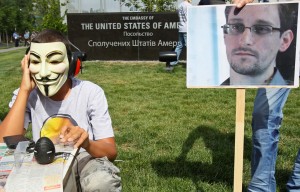 (Reuters) – The Edward Snowden saga may be a headache for his former employer Booz Allen Hamilton Corp and its 67 percent owner, the private equity firm Carlyle Group LP, but it could turn out to be a bigger problem for some of Carlyle’s rivals.

Like Carlyle, a whole host of other private equity firms piled into the defense and intelligence sector between 2007 and 2011, snapping up various contractors and consultants. Unlike Carlyle, though, most have not recouped their original investments and some of them may be staring at losses if they sold the assets today.

The industry is under growing pressure because of a series of apparent security problems that allowed Snowden to leak details of secret U.S. surveillance programs and, according to government officials, badly compromise U.S. national security.

Among the questions being asked by lawmakers and investigators are how Snowden, who worked as a Booz contractor at a National Security Agency facility in Hawaii, obtained security clearance despite red flags in his background. There is also concern about how he was able to download many top-secret documents and flee for Hong Kong only about a month after starting in the job, without triggering massive alarm bells.

The result will likely be increased scrutiny of government contractors by the NSA and other parts of the defense establishment, and greater oversight from Congress. Some contracts may be reduced or taken away from individual firms.

All of that could hurt revenue and margins in a business that is already under increasing stress because of defense industry cuts, including the sequestration that began hitting in recent months.

Still, while the storm could damage some companies, most experts think it will blow over for the industry as a whole. It isn’t as if the Pentagon and related agencies are going to be able to reduce their massive reliance on contractors overnight, nor will they want to, given the huge skill set from the private sector that they rely upon.

Indeed, NSA head General Keith Alexander said on Thursday that “we couldn’t do our job without the support we get from industry. One individual has betrayed our trust and confidence, and that shouldn’t be a reflection on everybody else.”

Hardest hit may be Providence Equity Partners. A U.S. government watchdog is already examining USIS — the largest private provider of federal government background checks — which conducted a 2011 background investigation into Snowden. USIS is a unit of Altegrity Inc, which in turn is owned by Providence.

On Thursday, the Washington Post reported that federal investigators have told lawmakers they have evidence USIS repeatedly misled the government about the thoroughness of its background checks, citing people familiar with the matter. The Post said that the problem is so serious that the watchdog plans to recommend to the Office of Personnel Management, which oversees most background checks, that it end its relationship with USIS unless it can show it is performing responsibly.

This could exacerbate Altegrity’s serious financial woes. In April, Moody’s Investor Service Inc downgraded Altegrity’s debt deep into junk territory, warning that unless its revenue and earnings rebound significantly in the near term, its capital structure may be unsustainable.

“USIS has been fully cooperating with the government throughout this process and we continue to work closely with the Office of Personnel Management to resolve this matter,” Altegrity spokesman Ray Howell said in an email, declining to comment further.

Carlyle, Providence, KKR & Co LP and General Atlantic LLC all bought businesses in recent years on the assumption that areas such as cyber defense and intelligence remained relatively safe from government spending cuts, and could even prosper if there was more outsourcing of work.

The theory has turned out wrong so far for most of these firms, with Carlyle the exception. The buyout firm was smart enough to take Booz Allen public right before cutbacks in U.S. defense spending triggered a downturn in the sector and reduced investors’ appetite for such IPOs. Part of that decision was due to the desire to have publicly traded shares as part of the compensation of Booz Allen executives.

Booz is also better-established than some, given its long history of government contracting.

Over the past two years, Booz Allen’s competitors have seen their revenue take a hit and their valuations punished by spending cutbacks. They are now stuck with deals that look expensive in hindsight.

“A number of private equity firms paid significant prices for defense-related businesses. Today, they will find it challenging to exit those businesses and generate attractive returns due to current valuation levels in both the public and private markets,” said Michael Urfirer, co-chairman and co-chief executive officer of boutique advisory Stone Key Partners LLC.

Publicly listed peers, including Booz Allen, now trade at above 6 times their projected 12-month EBITDA, according to Thomson Reuters data.

Moreover, few industry buyers are likely to come to their rescue as long as the future of defense spending remains up in the air amid the larger budget argument in Washington, bankers said.

“If you look at the private equity deals that took place more recently, right before sequestration caused the market to slow down, they have a long road to go,” said William Farmer, a veteran aerospace and defense banker who founded advisory firm Twelve Rolling Capital LLC.

Representatives for the contractors and their private equity backers declined to comment on their business prospects.

To be sure, these private equity firms still have time to improve on their investments before they exit them.

Despite being at the center of the scandal as Snowden’s former employer, Booz has held up better than rivals, thanks to its position of working for the most complex and classified government projects.

The McLean, Virginia-based firm has been on the U.S. government’s payroll since 1940, starting off by helping the Navy prepare for World War Two. With Carlyle’s help, the firm shed a private sector consultancy business to focus solely on government work.

For its bet, Carlyle has already been rewarded handsomely, with its investment now valued at about three times its money. Carlyle invested $956.5 million of equity in the deal in 2008, and has since taken out $1.17 billion in special dividends. It did not sell any shares in Booz Allen’s 2010 IPO, and its stake is now worth about $1.6 billion.

“It is certainly a public relations issue, not just for Booz Allen but for the sector,” said BB&T Capital Markets analyst George Price, who rates Booz Allen stock a “hold.” “But to make it into something bigger than that which would have a material impact, I think it’s too early.”

The mean price target of analysts who rate Booz Allen’s stock is $14.67, according to Thomson Reuters Starmine. The company’s shares, though, have recovered more than half the losses they suffered after the Snowden saga began to unfold, and closed on Friday at $17.38, above their 2010 IPO price of $17.

Photo: Activists from the Internet Party of Ukraine perform during a rally supporting Edward Snowden, a former contractor at the National Security Agency (NSA), in front of U.S. embassy, in Kiev June 27, 2013. REUTERS/Gleb Garanich