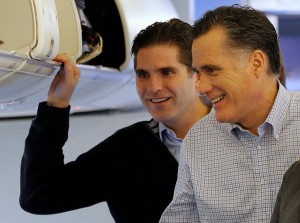 Mitt Romney, who lost the Republican bid for the presidency to Barack Obama, joined his son’s firm in March with the title of executive partner and group chairman. According to a report from NBC News, Mitt Romney’s role at the firm would amount to one week a month and would not involve fundraising. Prior to running for president, Mitt Romney was the governor of Massachusetts and founded Bain Capital, one of the world’s largest and most successful private equity firms.

According a March 2013 letter to Solamere investors posted on the Boston Globe’s website, the firm said it would “begin accepting new investment commitments in the first half of 2013.” That letter also said the new fund would be modest in size: “We feel strongly that there is value in not raising too large of a fund, and therefore anticipate keeping the size to a level we feel we can appropriately manage within our desired band of target returns.”

A person at Solamere said she was instructed not to speak to reporters about Fund II.

Tagg Romney co-founded Solamere Capital with Spencer Zwick in 2008. Eric Scheuermann is a third partner in the firm. The junior Romney also cultivated a rich variety of experiences before launching Solamere. Among his other roles has been chief marketing officer for the Los Angeles Dodgers baseball team and vice president for “on-field” marketing at Reebok.

A 2010 Buyouts profile of the firm’s $255 million debut fund disclosed that the fund-of-funds had invested in the vehicles of several prominent private equity and venture firms, including SCF Partners, Bain Capital, Battery Ventures and Charlesbank Capital Partners. Fund commitments ranged in size from $5 million to $20 million, and roughly two-thirds of the money was invested in commingled funds and one-third in co-investments.

Investors in the debut fund, according to the story, included Lee Scott, the former chief executive of Wal-Mart, and Meg Whitman, the chief executive of Hewlett-Packard and a former Republican candidate for governor of California.

On its website, Boston-based Solamere says it was “formed by a group of influential business leaders to leverage their industry expertise to access and execute superior private investments.”