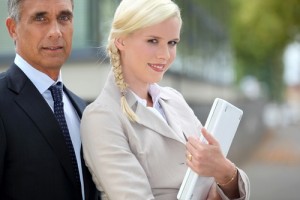 (Reuters) – When Randy Adams, 60, was looking for a chief-executive officer job in Silicon Valley last year, he got turned down from position after position that he thought he was going to nail — only to see much younger, less-experienced men win out.

Finally, before heading into his next interview, he shaved off his gray hair and traded in his loafers for a pair of Converse sneakers. The board hired him.

“I don’t think I would have been able to get this CEO job if I hadn’t shaved my head,” says Adams, who has founded eight venture-backed companies. He is now chairman of the company that hired him, mobile conference-call service Socialdial, and is fundraising for a new business. Adams has supplemented his makeover by trading in his button-down shirts for T-shirts, making sure he owns the latest gadgets, and getting an eyelid lift.

Such are the pressures in Silicon Valley, where the start-up ethos extols fresh ideas and young programmers willing to toil through the night. Chief executives in their 20s, led by Facebook founder Mark Zuckerberg, are lionized, in part because of their youth. Many investors state bluntly that they prefer to see people under 40 in charge.

Yet the youth worship undercuts another of Silicon Valley’s cherished ideals: that anyone smart and driven can get ahead in what the industry likes to think of as an egalitarian culture. To many, it looks like simple age discrimination – and it’s affecting people who wouldn’t fit any normal definition of old.

“I don’t think in the outside world, outside tech, anyone in their 40s would think age discrimination was happening to them,” says Cliff Palefsky, a San Francisco employment attorney who has fielded age-discrimination inquiries from people in their early 40s. But they feel it in the Bay Area, he said, and it’s “100 percent due to the new, young, tech start-up mindset.”

Regional data on age discrimination are hard to come by, making it hard to establish precisely how Silicon Valley stacks up against other parts of the United States.

Of the 18,335 employment cases filed in 2010 with California’s Department of Fair Employment and Housing, one-fifth cited age. That puts age below retaliation as a discrimination claim, but above racial discrimination, sexual harassment, and sexual orientation.

Nationally, retaliation is also the most frequently cited discrimination claim, according to the federal Equal Opportunity Employment Commission. But age comes much lower down on the national list, below race, sex, and disability.

The federal agency says age is cited in 26 percent of total complaints in California, compared to 22 percent in New York and 21 percent in Texas. Among large states, Illinois had the highest ratio of age-related complaints, at 37 percent.

She recalls a meeting at a software company a few years ago, when the human-resources executive told her he would like to find somebody “around age 26 or so” to fill a job. An age requirement along those lines would violate both state and federal laws on discrimination, California labor lawyers say.

“You mean, somebody less jaded?” Fuentealba recalls asking, hoping to jolt the executive back into legal territory. “And he said, ‘No, I mean somebody young, probably no older than 26.'” Back at the office, she sent the executive resumes from a variety of candidates.

Jeff Spirer, a 61-year-old technology marketing and strategy veteran, landed a new job in October after a stint doing part-time consulting. It was a tough search. He recalls the follow-up after a long phone interview at a small online-surveys company last year.

The hiring manager asked Spirer to come in for an interview with the chief executive, who was in his 20s. When Spirer walked into the room, the CEO looked at him, said something had come up unexpectedly, and left.

The interview never got rescheduled, and a younger candidate eventually got the job. Spirer cannot say for sure, but he thinks the CEO was taken aback to see somebody with wrinkles. “What other conclusion can I draw?” asks Spirer.

Age discrimination is notoriously difficult to prove. Lawyers say they typically do not have smoking guns such as emails saying the candidate or employee is too old, and need to be able to show through other methods such as statistics that the company is making employment decisions based on age.

In some cases, there are reasons other than bias for preferring younger workers in a startup setting. People with young children can be strapped for time and less able to work long, late hours. Younger workers are more likely to be expert in the newest software programming protocols. Young entrepreneurs, like many others, often move instinctively in hiring from the cohort of those they know.
Yet there are some indications that age bias is now part of the culture in Silicon Valley -especially visible in what Adams of Socialdial calls the “cachet of the young entrepreneur.”

When young executives like Zuckerberg are successful, their age often gets a lot of attention. Successful older entrepreneurs, on the other hand, take pride in every aspect of their accomplishments – except their age.

When the software company Workday went public last month and raised $637 million, little attention was paid to the fact that co-founder and co-CEO David Duffield is 72.

Sandy Kurtzig founded Ask Computer Systems and its manufacturing software program, Manman, and saw the company through a stock-market listing in 1981. Now, she has raised $10.5 million from Kleiner Perkins Caufield & Byers and others for her new software company, Kenandy. She says she is in her 60s and leaves it at that, explaining, “I don’t want to advertise it.”

Investors, in contrast to employers, are not subject to discrimination laws when deciding whom to fund. And they are among the most outspoken in declaring their age preferences.

“I am just an incredibly enthusiastic fan of very talented 20-somethings starting companies,” Sequoia Capital’s Mike Moritz, 58 years old and a top VC, once said at a conference, echoing similar comments he has made over the years. “They have great passion. They don’t have distractions like families and children and other things that get in the way of business.” He was 49 at the time.

“Unfortunately, I don’t think the quote you have selected is very representative of what I think,” Moritz said in an email. He declined to elaborate.

Khosla says the line came in the context of a talk where he was discussing the fear many older people have of failure, contrasted with many younger people’s experimental bent. “I was encouraging people to try new things that go against conventional wisdom,” he says.

Khosla Ventures invests in several companies with over-45 leaders, including Nu-Tek Salt LLC and its CEO, Tom Manuel.

Some venture capitalists extend their appreciation of youth to their own partnerships. In June, Benchmark Capital’s Peter Fenton, 40, told a group of journalists that Benchmark strives to keep the average age of its most-active partners under 40 to better relate to young entrepreneurs.

Fenton says he is not ageist, arguing that there is a well-documented relationship between youth and creativity. As for partners such as himself who hit 40, “we have a discipline to try and stay young,” he says. “Young at mind.”

Mark Zuckerberg himself once told a class at startup-funding firm Y Combinator that hiring only young people with technical expertise was the best way to found a successful company. “Young people are just smarter,” he said. Zuckerberg was 22 at the time. Through a spokeswoman, he declined to comment.

Yet there is little evidence to support the idea that young people are intrinsically more likely to thrive as entrepreneurs.

Fluid intelligence, which allows people to think logically and solve problems, does deteriorate with age, behavioral scientists say. But another type of intelligence known as crystallized intelligence, the ability to tap into experience and amassed knowledge, improves somewhat until about age 65.

The conventional wisdom about young people being more focused on work is itself a stereotype, older executives say.

“I have more time than a 35-year-old with a newborn,” says Spirer, the marketing veteran. “And I’m more available. Judgments are made on age-related stuff without thinking it through.”

Laurie McCann, an attorney with retiree lobby AARP, says the technology sector’s obsession with fresh ideas and long hours leads people to fall back on easy assumptions about age.

“That older people can’t work that fast,” she says. “That they can’t think on their feet in order to come up with the ideas.” Further assumptions include inability to change on the part of older employees, or to get along with younger people.

Other fields, such as law, education or healthcare, also value creativity and hard work, she says, but less so than a track record. “Any field where experience is valued, I think you’re going to find less instance of discrimination,” she says.

Silicon Valley veterans try to adapt as best they can. Adams of Socialdial ticks off a list of faux pas that he believes peg older jobseekers as outsiders. “You can’t have an AOL email,” he says. “That’s horrible. A Gmail address is okay. What’s really cool is an email with your name on it,” as part of the domain.

In person, older job applicants should carry a backpack, not a briefcase, he says. Avoid Blackberries and Dell laptops in favor of Android phones and Apple products. And above all, steer clear of wristwatches, which most younger people have replaced with the clocks on their phones. “The worst would be a gold Rolex,” he says. “Tacky, and old.”

Some recommend dressing young. For her first interview at Facebook, 40-something market researcher Sally Sadosky headed to a boutique popular with women 20 years her junior for advice on “something to look hip” and “blend in.”

She ditched her tailored pants and blouses for a dress, tights, and biker boots. She then got second and third interviews and had to come up with more hipster outfits. “I was beginning to sweat,” she recalls. She eventually got the position.

Adams recommends getting rid of gray hair, either through dyes or through shaving, as he did. He also believes in treating wrinkles or other skin-related signs of age. A few years ago, he underwent an eyelid lift to reduce sagging above his eyes.

The cosmetic surgery route seems increasingly common among the men of Silicon Valley. Roy Hong, chairman of the Palo Alto Medical Foundation’s plastic surgery department, says men represented 14 percent of his customers last year, up from 9 percent a decade ago.

Still, the scalpel is where some draw the line. Spirer complains that his friend Adams, buoyed by eye-surgery success, is hounding him to undergo a similar procedure for a more youthful image and enhanced job prospects.