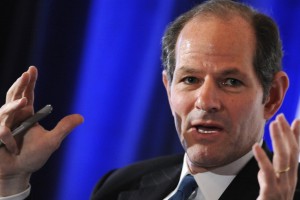 New York-based Cerberus, which has more than $20 billion in assets, owns the Freedom Group, which calls itself the largest maker of commercial firearms and ammunition. Madison, N.C.-based Freedom owns Bushmaster, which makes the rifle used by Adam Lanza in the recent Connecticut massacre. (Spitzer calls it “the weapon that brought evil to Newtown.”) Freedom also owns Remington Arms Co., which is known for equipping U.S. soldiers, as well as Marlin Firearms Co., another rifle-maker.

Spitzer, in the Slate article, says it’s time to expose which pension funds have put money into Cerberus and pressure them to exit. Or, he wants Cerberus to alter how the gun industry operates. The former governor says it’s “ironic” that it was “tougher to rent a car from Alamo” when it was a Cerberus portfolio company than to buy a semi-automatic. “If a major union pension fund or university endowment has an investment with Cerberus, it surely doesn’t want to be tarred as a passive owner of the company that sells semi-automatic weapons with no background checks or concern for the use of the weapons,” Spitzer writes.

Ownership, Spitzer says, comes with both responsibility and power. “It is time for every comptroller and pension fund manager with an investment in Cerberus to use that power,” he says.

Spitzer called on those of us “on the outside” to identify Cerberus’s investors and make them act. The Term Sheet’s Dan Primack reports that CalSTRS committed to invest $500 million into a $7.5 billion Cerberus fund and could effectively own 6.67% stake in Freedom. CalSTRS is reviewing its investment in Cerberus in light of the Newtown school shooting, Reuters reports.

Cerberus began building the Freedom Group when it acquired Bushmaster in 2006. The PE firm then bought Remington in May 2007. Later deals included the firm’s acquisition of Marlin and Defense Procurement/Manufacturing Services. Freedom planned to go public but pulled the deal in 2011. The gun maker recently reported sales of $677.3 million for the nine months ended Sept. 30, up nearly 20% from $564.6 million for the same time period in 2011, according to a Sept. 30 quarterly report. Freedom, which employs over 3,000 people, sold 1.2 million long guns and 2.6 billion round of ammunition in the 12 months ended March 2010, according to a New York Times article from November 2011.

Cerberus owned 94.3% of Freedom Group, according to a May 2010 regulatory filing.

Spitzer also wants to prohibit the sale of bullets to anyone who isn’t licensed to carry a gun legally and make resale a crime. “Every student at a university should ask the university if it is invested in Cerberus,” he says. “Every member of a union should ask their pension-fund managers if they are invested.”

Officials for Cerberus and Freedom could not immediately be reached for comment.