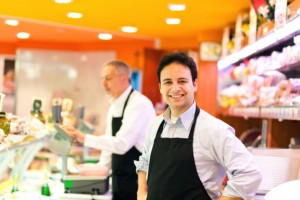 Aramark Holdings, one of the big club deals from the last decade, is slated to go public next week. The IPO would give Aramark’s private equity investors a path to exit, but the food service provider will enter the public markets saddled with much debt.

Philadelphia-based Aramark is expected to price its IPO on Dec. 11 and trade the next day. The food service provider is offering 36.25 million shares at $20 to $23 each via bookrunners Goldman Sachs, JP Morgan, Credit Suisse and Morgan Stanley, according to SEC filings. Of the 36.25 million shares, the company is offering 28 million while another 8.25 million is coming from selling stockholders. Aramark expects to list on the NYSE under the symbol “ARMK.”

This will be the third time Aramark, which provides food services to stadiums and arenas, is going public. Aramark went public in 1960 and in 2001. Aramark was also a public company when five private equity firms — GS Capital Partners, JP Morgan Partners, CCMP Capital Partners, Thomas H. Lee Partners and Warburg Pincus — acquired it in 2007 in a deal valued at $8.6 billion. Investors contributed $2.1 billion in equity, according to a Moody’s Investors Service report from that time.

With the LBO, Aramark’s debt ballooned to $7.3 billion in 2008, according to Edmond DeForest, a Moody’s VP and senior analyst. That’s more than triple the $2 billion in debt Aramark had in April 2005, two years before it was sold to sponsors. Moody’s has given Aramark a ‘B1’ corporate family rating. The ‘B1’ is a “high rating given the amount of debt they have,” DeForest said.

“Aramark’s business is very stable from a profitability and cash flow standpoint…It’s a business that can support a lot of debt,” he said.

The company did reduce its debt to $5.4 billion in 2010, but then added leverage to pay out a roughly $711 million dividend to shareholders in 2011, according to SEC filings. Another distribution came in 2012. At that time, the company spun off its majority stake in Seamless North America to its stockholders in the form of a dividend. It’s unclear how much the sponsors received but the proceeds are believed to be small. (Aramark did sell a noncontrolling stake in Seamless to Spectrum Equity for $50 million in 2011.)

Aramark’s revenue, for the most part, has remained stable, DeForest said. Sales did drop to $12.3 billion in fiscal 2009 ending Sept. 30, after the height of the financial crisis, but have since rebounded. The company generated $13.9 billion of sales in fiscal 2013, up about 6 percent from fiscal 2011, SEC filings said.

Before the IPO, the PE firms owned a combined stake of roughly 84 percent. They are each selling small chunks. Warburg Pincus, GS Capital and Thomas H. Lee Partners each own roughly 21 percent of Aramark.

GS Capital and THL are each selling 1.41 million shares and stand to each make $30.3 million. Assuming the greenshoe is exercised, each firm’s holding will fall to 17.36 percent, or about 39.9 million shares. At $21.50 a share, the stake owned by GS Capital and THL would each be valued at $858 million. The firms likely each received $149.31 million in 2011 dividend proceeds, as well as $30.3 million from the sale of Aramark stock.

Assuming that GS Capital and THL each contributed $441 million equity, the firms appear to be doubling their money, including the $858 million in paper gains.

Without the ample paper gains, the sponsors appear to have recouped less than half of their investment after nearly seven years. Aramark also has more debt than when it was acquired.

The IPO, however, allows Aramark’s PE investors to sell their stake down in subsequent secondary offerings. It would be unlikely for Aramark to find a buyer in the current environment given the large equity check needed. And club deals have fallen out of favor with private equity firms.

“The public market is probably giving [Aramark] a value higher than the private [market],” one PE executive said.