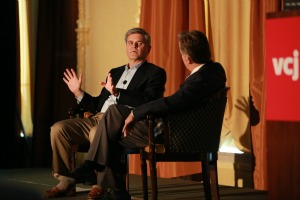 Chances are, if Steve Case were trying to bring a company like AOL public now, he’d get laughed out of a roadshow.

When AOL was set to go public some two decades ago, its stats were downright meager. Nevermind it was only doling out a meager $10 million in stock to investors.

(Venture Capital Journal subscribers can watch a video of the full interview with Case here.)

“We had been at it for seven years, and we only had 200,000 customers,” he said at Thomson Reuters Venture Alpha 2012 in San Francisco on Thursday, speaking with Reuters digital editor Lawrence Aragon at the day-ending keynote address.

Then again, the online environment had barely even begun to bud. A now-incomprehensible three percent of Americans made up AOL’s target base, and spent an hour a day online. Compare that to now, when most Americans have been online for an hour before they even show up for work.

But the idea Case was driven by then is the one he espoused at our annual venture capital networking event: the key ingredients to startup success are as simple and complicated as people, passion, and perseverance.

Case had his detractors.

“Most people thought—including my parents—we were crazy,” he said. “We did believe 25 years ago… the soul of the Internet was community… We believed someday, everybody would get online, it would change the world.”

And, more recently, Case has worked with other VCs and legislators to put the Jobs Act into action—he said it has helped boost the IPO pipeline, and that he expects the final components of the law to be formalized by the US Securities and Exchange Commission in the first quarter of 2013. Additionally, he said during his discussion, he doubts the upcoming election will have much impact.

What will have an impact is crowdfunding, once it has been finalized and put into place. Case said that this component of the Jobs Act will help bring capital to regions of the US that are underserved by VCs.

And as for the entrepreneurs waiting on that capital, Case simply imparted the same advice he followed a quarter-century ago.

“Focus on a battle worth fighting. If I’m successful, the world’s going to be a better place.”