Sharing wisdom gleaned as a senior executive at HGGC after his years as a Super Bowl-winning quarterback for the San Francisco 49ers, Steve Young told private equity pros to huddle, embrace change and find out how good they could be at the PartnerConnect West conference Tuesday.

Young, a managing director at the San Francisco-based firm, said his first major challenge was trying to fill the shoes of Joe Montana, considered one of the best quarterbacks of all time.

His breakthrough came when he decided to see how well he could do with the exceptional resources available to him at the San Francisco 49ers, instead of worrying about his predecessor. 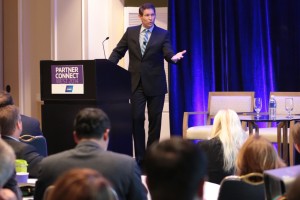 Young said he had to overcome a disadvantage in height, since he’s close to six feet tall, less than the six-foot-two he claimed on his football trading cards.

“The coach would ask me why I didn’t throw to [star receiver] Jerry Rice since he was open. I said it was because I couldn’t see him,” Young said to a packed room of about 250 people at the Ritz-Carlton at Half Moon Bay. (PartnerConnect West was produced by Buyouts Insider, publisher of peHUB.)

Young said he decided to “throw blind” to Rice because he knew where the receiver would be on the field.

He drew some chuckles from the crowd when talking about NFL Hall of Famer Reggie White, who would routinely sack him, and then try to schedule a dinner date with their families while he helped him up from the turf.

“Not now, Reggie,” Young would say.

In business, Young said White helped him learn about competing to the edge, but still finding common ground and remaining civil and friendly as much as possible.

Young said he supports the huddle in private equity, which allows buyout pros to figure out their next moves by holding frequent but short, effective meetings. 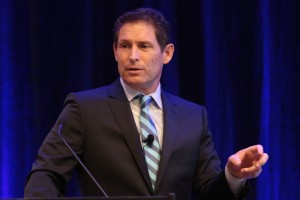 He pointed out that communication among groups degrades significantly with more than seven people, based on studies of human cognitive ability.

“The magic in life is figuring out how to do things with too many people,” Young said.

After winning the Most Valuable Player award in his Super Bowl victory, Young was taken to Disneyland to lead a parade and stand next to Mickey Mouse on a float. He said he was brought back to earth relatively quickly after a young boy thought he was just the famous icon’s body guard.

The experience taught him he had to go back to “climbing the mountain” and transition to new challenges, he said.

This story first appeared in peHUB affiliate Buyouts magazine. Subscribers can read the original story here. To subscribe to Buyouts, click here for the Marketplace.