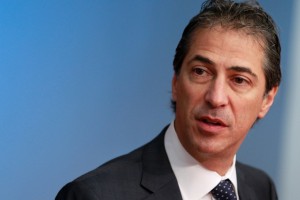 Leder has been outted as the host of a Romney fundraiser back in May. It was at this $50,000-a-plate dinner where the Republican presidential candidate made disparaging remarks about Obama voters.

In a widely circulated video, Romney says that 47% of Americans are Obama voters who see themselves as “victims.” The 47% are “dependent on government” and “believe they are entitled to healthcare, to food, to housing, you name it,” according to Mother Jones.

Leder, in a statement to Reuters, admits he hosted a “fundraiser for an old friend.”

“I believe all Americans should have the opportunity to succeed, to improve their lives, and to build even better lives for their children,” Leder said in the statement. “I have supported people from both political parties who share this view and make it a priority, even though their ideas on how to achieve it may differ.”

Leder has been criticized for personifying the more negative elements of private equity. Since 2008, nearly 25 companies backed by Sun Capital have filed for bankruptcy, according to the New York Times. The Sun Capital exec has also been in the press for hosting scandalous parties.

His connection to Romney goes back years, the Times has reported. Leder reportedly visited Bain Capital years ago and this inspired him to go into private equity. Romney was also an early investor in some early Sun Capital deals, the New York Times says.

Leder has given more than $60,000 to Romney’s campaign and other Republicans, according to the Washington Post. Leder has also given $225,000 to Restore Our Future, a super PAC that spent more than $50 million in ads for Romney, the Post says.