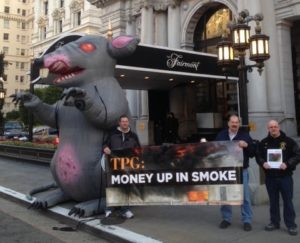 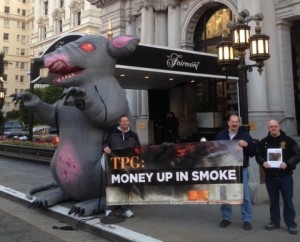 Members of the Teamsters union who transport chemicals for Nexeo Solutions, a Massachusetts-based supplier and distributor of chemical products, showed up today with a giant inflatable rat in front of San Francisco’s famous Fairmont Hotel, site of this week’s SuperInvestor private equity conference, according to sister magazine Buyouts. They’re here to protest aspects of TPG Capital’s $900 million-plus takeover of Nexeo Solutions in early 2011.

The Teamsters said that TPG Capital “loaded” the company with $600 million in debt and then quickly slashed the retirement and health care benefits of Nexeo employees. In addition, the union said in a release, Nexeo Solutions has not been vigilant about safety and has experienced two chemical fires in 2012, one in Illinois and another in Texas, that forced the evacuations of the facilities and surrounding areas.

TPG Capital said through its public relations agency that it would not comment on Nexeo Solutions or the San Francisco demonstration against the firm.

Earlier this month, in another display of continuing public demonstrations against private equity, employees of a Sealy mattress factory in Oregon who are trying to save their jobs took their message directly to private equity investors, in this case, the Oregon Investment Council.

The council is one of the largest investors in Kohlberg Kravis Roberts & Co., a private equity firm that has a large stake in Sealy.
The Sealy workers, who are aided in their efforts by the Oregon Working Family Party, are urging the council to divest the $7 billion it has invested with KKR since 1981 if the private equity firm doesn’t save the North Portland plant. While a divestment is unlikely, according to The Oregonian newspaper, the workers have been successful raising public attention.

Ted Wheeler, the state treasurer, who oversees the Oregon Investment Council, reportedly wrote to KKR in an effort to push executives at Sealy to keep the plant in operation.

Of course, during the presidential campaign of Mitt Romney, private equity was getting an unprecedented level of attention. The Republican nominee’s former firm, Bain Capital, was on the receiving end of multiple public protests, including several at Bain-backed Sensata Technologies, a Netherlands-based car sensor controls company, that threatened to move 170 jobs at the firm’s Illinois plant to China.

This article first appeared on the Web site of Buyouts Magazine.