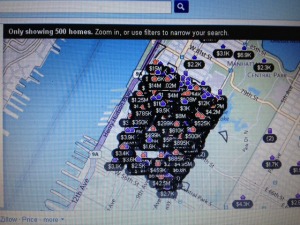 Thanks to the newly-minted legislation shielding it from figures restatements (à la Groupon), Trulia is obscuring its business model at the worst possible time—as the online real estate business is experiencing a permanent shift away from the desktop and onto the handset. If investors are still sore about how Facebook’s stock performed in that transition, it could spell trouble for the first big name to use President Barack Obama’s landmark legislation to access public markets.

Trulia’s top competitor—its only bellwether, really—Zillow, released numbers to shareholders that might unnerve investors in Trulia. That is, as long as those investors had any idea what the company’s revenue picture looked like six months ago, compared to what it might look like in a year. If Trulia has a greater dependence on advertising than its Washington-based competitor, it—and shareholders—might have something to worry about.

In quarters to come, it seems, online real estate search companies will have difficulty making as much as they do now on advertising. Zillow’s quarterly report indicates that Trulia’s advertising revenue—whatever that might be—could be jeopardized by the move by consumers from desktop to handset.

For the first time, “more homes each month are now viewed via Zillow on a mobile device than on a desktop,” the company said in its earnings statement. Considering the fact that nearly $14 million of the company’s revenue last quarter (close to 30% of this quarter’s top line) is derived from display ads, Zillow’s stock price could take a shellacking unless it finds a way to keep advertisers happy and mobile users clicking at the same time.

That isn’t to say Zillow is bailing water out of its own boat—the company’s biggest vertical is performing well, and growing quickly. Similar to LinkedIn, Zillow’s subscriber base of real estate agents is growing (within its ‘marketplace vertical’). And fortunately for Zillow, the marketplace vertical is growing at a quicker rate than display ads—revenue for the six months ending June 30, 2012, were about $36 million, more than double what they were over the same timeframe the prior year. The 22,696 “premier agent subscribers” for the six months that just concluded are also about double what Zillow had in 2011.

However, unlike LinkedIn, which is neither a social network nor a mobile business model, Zillow is confronting the same difficulty with mobile users that could disrupt the advertising schemes of companies like Facebook. How do we shrink a screen 17 inches across into a page the size of a baseball card and still make all that advertising revenue?

As for Trulia backers, and would-be retail buyers, they’ll just have to sit tight until about a month before the company’s executive team rings in the IPO. How Trulia’s ‘marketplace’ and ‘display’ segments compare to Zillow’s could determine which company rules over the other on public markets. The Jobs Act has eliminated spoilers (perhaps the way NBC wishes it could have for the Olympics), but it remains to be seen whether this attracts or spooks investors. As Zillow is a bellwether for Trulia, Trulia may turn into a bellwether for the Jobs Act.

Image Credit: Screenshot of Zillow in NYC via Jonathan Marino