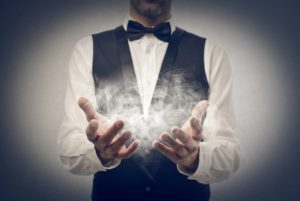 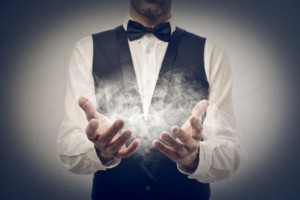 Imagine the following success story: Sharp-eyed entrepreneur with a great idea goes to see venture capitalist. He raises a couple million dollars to develop a product, and then raises another $10 million or so over a couple follow-on rounds to build out sales and marketing.

Around the fourth year of the company’s existence, with $20 million in trailing 12-month sales and profitability a distant goal, the company executes a well-received public offering that raises $20 million in cash for which the company sells about 15 percent of its total shares. The company makes a handsome return for its venture investors and employees, and still has headroom to grow while pursuing dreams of becoming an enduring standalone company or perhaps ultimately merging with another public company at a reasonable premium to its market value.

Hmmm, doesn’t sound familiar? A pre-$200 million IPO valuation? Is this some fantasy world? For those of us over the age of 40 or so, we can actually remember when this was the bread-and-butter of the VC industry, served by a “bulge-bracket” of specialist investment banks that no longer exist (H&Q, Montgomery, Robertson Stephens, Alex Brown). As the chart below shows, IPO volume has been drastically down since the 1990s, although the amount raised in those offerings that are successful is actually up. 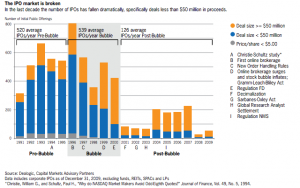 In 2000, the SEC mandated that stock prices be “decimalized,” or traded in fractions of a dollar as small as $0.01. Prior to 2000, stocks traded in 1/16 dollar, 1/8 dollar, or perhaps even 1/4 dollar increments, depending on volume. The trading desk of an investment bank makes its money being a market maker in a particular stock — and the profit it makes is dictated by the bid/ask spread between the selling and buying prices for the stock.

Decimalization reduced the profit a bank can make at the expense of the shareholder, which is good. But, how much can a bank make on a thinly traded stock with only a few million dollars traded each day if the bid/ask spread is a penny? The answer is, not enough to stay in business and certainly not enough to support research that would stoke further interest in the company.

So, companies have to get to a scale where the banks can profitably be market makers, and that seems to be about a minimum $75 million offering, which means a much bigger IPO. But with fewer, larger IPOs, what is the path to liquidity for VCs and angels?

M&A activity is robust right now, and it has made up for a good deal of lost liquidity in the IPO market. But, if we see a fall-off in M&A activity, many companies are stuck without another option. There are also too many companies that get stuck in no man’s land. Their growth slows down before they reach IPO territory, and in many cases, especially if they are six, seven, eight years old, they have raised too much money to be acquired, and it starts getting difficult to retain employees with illiquid stock. The company can try merging with another private company, but these deals are notoriously hard, and it often pits preferred and common shareholders against one another.

Our industry would be much healthier if we went back to the days when stocks traded in 1/8 or even 1/4 dollar increments for small companies. Most CEOs I know would be quite happy with it. There would be a shorter path to liquidity, more upside for public market technology investors, and more research so that public market pricing could be more efficient.

The National Venture Capital Association and my partner Venky Ganesan have been working on this issue with the SEC and there is indication that relief might be in sight. The JOBS Act of 2012 mandates that the SEC perform a five-year study of the impact of decimalization, and Congressman David Schweikert (R-Ariz.) has drafted a bill that would allow $0.10 spreads for companies with under $1 billion market capitalization. We should all hope it happens. This is a case of a destructive consequence of seemingly good legislation that reduces investment in innovation.

Mark A. Siegel is a managing director at Menlo Ventures. He focuses on investments in data storage, cloud computing, big data and digital advertising. His active investments and board seats include Dropcam, eXelate, Invidi, Media6, Mixr, Pluribus Networks, Tintri and Voltage Security. He may be reached at mark@menlovc.com.