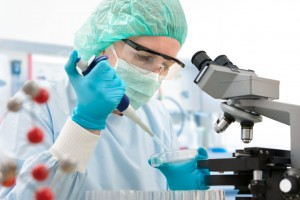 Life Tech, with a current market value of more than $11 billion, has become an attractive target due to its strength in advanced diagnostics and gene sequencing and if Thermo Fisher were to prevail, the deal would make it a major player in the genetic sequencing market.

It would be also be by far its biggest deal since the $12.8 billion merger in 2006 of Thermo Electron and Fisher Scientific International that created the world’s largest maker of scientific equipment and laboratory instruments.

Thermo Fisher met a bid deadline on Tuesday but private equity firms working on a joint bid missed it and were working late into the evening to secure the equity required to support an offer, the people said.

Life Technologies would likely accept an offer past the bid deadline to keep the process competitive, the people added.

Thermo Fisher is bidding more than $65 per each Life Tech share, two of the people said. While the exact price could not be learned, Thermo had been considering a bid of $65 to $70 per share, sources said last week.

All the people asked not to be named because details of the auction are not public. Life Technologies, Thermo Fisher, KKR, Blackstone and Carlyle declined to comment while Temasek did not respond to a request for comment.

At this level, Life Tech trades at 14.6 times forward 12-month earnings compared to an average 13.6 times for its peer group, according to Thomson Reuters data.

While their position could not be confirmed, one of the people said that neither of these two companies had carried out the procedural work necessary ahead of the bid deadline that would have allowed them to make offers. Danaher and Roche did not respond to requests for comment.

Roche, which has its own diagnostics business, made a hostile run at genetic sequencing company Illumina Inc last year but walked away from the $6.8 billion offer, refusing demands to raise the bid.

Life Tech is itself the product of the combination of two companies — Invitrogen, a maker of cultures used in the manufacture of biotech medicines, and Applied Biosystems, a genetic testing company.

If Thermo Fisher wins the auction, it would also boost its presence in scientific research, genetic analysis and applied sciences, creating a healthcare technology giant with annual revenues of over $16 billion and some 50,000 employees.

At a range of $65 to $70 per share for Life Tech, Thermo Fisher believes the deal would add to its earnings, people familiar with the matter have previously told Reuters.