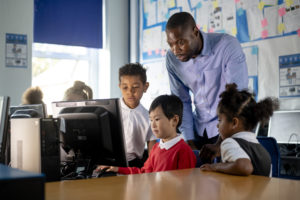 Good morning, dealmakers. MK Flynn here with Tech Tuesday on the Wire.
While August has been slow for many private equity firms, Thoma Bravo has been buying and selling at an impressive clip.

Today, the tech-focused firm said it has agreed to sell Frontline Education, a provider of administration software for K-12 educators, to Roper Technologies, in an all-cash transaction for $3.7 billion.

During Thoma Bravo’s five years of ownership, the Malvern, Pennsylvania company completed six strategic acquisitions, “significantly” grew revenue, expanded product offerings from 16 to 30 and increased headcount by 70 percent, according to the PE firm, which has offices in San Francisco, Chicago and Miami, and is expected to open one in London shortly.

“Frontline is a terrific business with clear niche market leadership, a proven track record of strong organic and inorganic growth, excellent cash conversion, and an outstanding management team that will thrive as part of Roper,” said Neil Hunn, Roper’s president and CEO, in a statement.

Headquartered in Sarasota, Florida, Roper operates software businesses in niche markets and uses its excess free cash flow to fund acquisitions. The deal is expected to close in the fourth quarter.

For Thoma Bravo, the sale of Frontline caps a remarkably prolific month in dealmaking.

Earlier in the month, Thoma Bravo completed its acquisition of SailPoint Technologies, an Austin-based provider of enterprise identity security, in an all-cash deal valued at about $6.9 billion; wrapped up its sale of Barracuda Networks, a Campbell, California-based cybersecurity provider for small and medium sized enterprises, to KKR for a reported $4 billion; and closed the purchase of Mercell, a European provider of e-tendering and procurement systems based in Oslo.

Record returns. Another PE firm with cause for celebration this month is IMB Partners, which marked a milestone in ROI when it sold a company that manages construction projects for government contracts.

To find out more about the firm’s strategy, PE Hub’s Obey Martin Manayiti spoke with Tarrus Richardson, co-founder and CEO.

“IMB stands for Investors in Minority Businesses,” Richardson said. “We are intentional and unapologetic about trying to find ways to build, buy and/or grow minority or women-owned businesses. We are based out of Bethesda, Maryland, and we focus only on utilities and government contracting. We have completed seven acquisitions since 2014 and we expect to do at least two more by the end of the year.”

Earlier in August, IMB announced the sale of LaFata Contract Services to Anser Advisory, which is backed by Sterling Investment Partners.

“We bought LaFata Contract Services in January 2018,” Richardson explained. “We thought we could help that company expand and put significant investment into hiring the best and brightest management team. We also went from 90 people to over 200 people. We started winning more contracts because we had assembled a team that built our capabilities. For our investors, we generated 27 times return on our invested capital, which is a best for us and really an indication that we built a very strong business.”

“We were focused on what we consider to be safe, non-cyclical businesses and we thought both government and utilities were spaces where those businesses did well in good and bad times,” Richardson said. “When the pandemic happened, the words ‘mission critical’ and ‘essential services’ became the words used to describe these businesses, which has now made them attractive to a lot of private equity firms. For example, electric and gas utilities need to rebuild grids, and they now have allocated more capital to do it faster.”

Moving on. Buyouts’ Chris Witkowsky is tracking some departures at Stephens, the middle-market investment bank based in Little Rock.

Earlier this month, the bank’s head of US sponsored coverage, Brian Bratcher, left to join Lazard as a managing director, Chris reports. Bratcher took over Stephens’ US financial sponsors coverage in 2008, according to an archived version of his biography on Stephens’ website.

Another executive, Rob Pierson, recently resigned to take a role at another bank, sources said and the Stephens spokesperson confirmed. Pierson is understood to be joining Guggenheim Securities. A Guggenheim spokesperson did not return a comment request.

Stephens believes it maintains excellent sponsor coverage through its existing staff, and sees the area as one of growth, according to a spokesperson. “Stephens remains fully committed to coverage of financial sponsors,” the spokesperson said. “With a strong, dedicated senior and junior team and deep expertise, we’re able to cover the sponsor community at multiple levels in multiple sectors.”

For more on the moves, see Chris’ story.

Chris writes the Wire on Wednesdays, so you’ll see more from him tomorrow. And I’ll be back on Thursday.

All the best until then,