The biggest obstacle for Jim Cooper, who founded Thompson Street Capital Partners in 2000, isn’t the high-priced deal market or fears of a downturn.

The hardest thing for Cooper right now is that he’s just not very popular at his own firm.

Cooper, 62, has lived through downturns, including the 2008 financial crisis and the dot-com bust of 2001. Many at Thompson’s deal team have not.

The St. Louis private equity firm is filled with aggressive, strong personalities that are suited to the rigors of PE, Cooper said. Many of these young executives haven’t experienced an economic crisis, he said.

‘Someone has to be the bad guy’

Thompson’s managing directors know the types of transactions the firm will or will not do, he said. They generally don’t get enthusiastic about high-priced deals. But on occasion Cooper will play the bad guy and suggest a ceiling price, he said. This sometimes results in Thompson losing a deal, he said.

“Someone has to be the bad guy every now and then, and that’s me,” Cooper said with a laugh. “One day they’ll thank me.”

Cooper, who is Thompson Street’s managing partner, doesn’t expect a downturn anytime soon. He does see “forces out there that could lead to one.”

Tariffs, rising interest rates or a trade war could lead to a crisis, he said. So, Cooper is cautious.

Otherwise, life is good for Thompson Street, which closed its fifth flagship fund at $1.15 billion in July. The PE firm, which invests in healthcare and life sciences, software and technology services, as well as business services and engineered products, needed roughly four months to close Flagship V.

“It was virtually a one-and-done,” Cooper said. The firm targets middle-market companies with EBITDA of $5 million to $25 million.

The $1.15 billion fund is nearly double Thompson Street’s prior pool, TSCP IV, which closed on $640 million in 2015. The increase did cause Thompson Street LPs to wonder whether the firm would stray from its middle-market strategy, Cooper said.

“No, we will not drift,” said Bob Dunn, a Thompson managing director and head of acquisitions. Dunn explained that Thompson Street is looking to invest $200 million or more of capital a year. This works out to 20 deals, averaging $60 million equity per investment. Dunn compared this to Fund IV, which did 15 transactions at $40 million each. 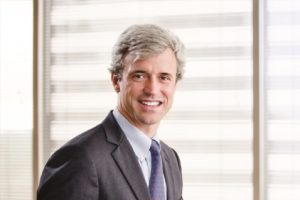 “This investment pace is right on for five years,” Dunn said.

Many PE firms are using add-ons to combat the high-priced deal market. Add-ons can help firms average down their entry multiple if they buy them at a lower multiple than the initial platform investment, Dunn said.

Thompson has used this strategy with success, completing about 30 add-ons in the past 24 months, he said.

Cooper said it’s the firm’s St. Louis roots that have helped Thompson Street win deals over rival shops from NYC and Chicago. Thompson Street typically buys companies from founders who are from the Midwest.

This Midwest connection also helps Thompson Street attract talent. The staff numbers 35, including 13 women. The firm employs women in positions such as CFO, head of capital markets and investor relations.

The buyout shop tends to hire one or two executives a year, Cooper said. Many times, they are St. Louis natives who attended college or business school elsewhere, often work in New York, and then return to the city when they want to raise their families, Cooper said.

“Our pool of candidates tend to be St. Louis natives moving back,” he said.

He pointed to Thompson Street’s latest hire. Elizabeth Wilkins, who was raised in St. Louis, joined Thompson Street in June as an IR associate. Wilkins most recently was with Abraaj Group, her LinkedIn profile said.