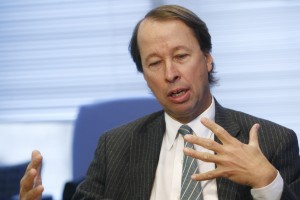 Limited partners these days are a finicky bunch.

“One big LP wants to invest in African power, we have others that want Asian core real estate,” Blackstone’s President Tony James said on the firm’s first quarter earnings call on April 16. “We’re much more in business creating special vehicles for LPs that want certain things… There’s much more money coming into separate accounts than in broad commingled funds.”

Blackstone Group is scaling its business not through the old-fashioned private equity-style vehicles, but through new ideas and products, says firm President Tony James said.

Make no mistake, Blackstone is a machine when it comes to raising those old-fashioned PE funds.

The firm is in the market raising its seventh flagship private equity fund, which is expected to hold a first close on at least $10 billion in the second quarter and has a $17.5 billion hard cap. Blackstone raised $16.4 billion in real estate, including closing its $14.5 billion eighth global opportunistic real estate fund.

But growth is coming from different places, James said. “What’s scaling is the creation of new products around new capabilities,” he said. As an example, he cited Blackstone’s recent announced acquisition of the bulk of GE Capital Real Estate.

That purchase will mean Blackstone will “end up with capabilities in Australia and Mexico, teams in those places that we didn’t have before,” he said. “That opens new product opportunities and new fund opportunities.”

One innovative business Blackstone is growing is its so-called Tactical Opportunities (TacOpps) group, which chases investments that don’t fit the mandates of the firm’s primary businesses. TacOpps invests across strategies and has targeted opportunities in mortgage loans, shipping opportunities and a wealth-management business.

About $2.4 billion of Blackstone’s $30 billion quarterly fundraising total went to the firm’s second-generation Tactical Opportunities fund, which is a blend of large separate account vehicles and a commingled fund. The firm has raised $3.1 billion so far for TacOpps Fund II, Blackstone said in its earnings release. Fund II is targeting between $7 billion and $8 billion, Buyouts previously reported.

Another $2.6 billion of the quarterly fundraising total came through Blackstone’s retail networks in the first quarter, Laurence Tosi, chief financial officer, said on a separate analysts call. He added that the firm has raised about $11 billion through retail over 12 months.

Retail “continues to both surprise us as well as to be a significant contributor,” Tosi said.

Blackstone did not specificy how much of the Q1 fundraising total is earmarked for commingled vehicles and how much is for separate accounts.

The firm has $64.5 billion of undrawn capital, according to the earnings report.