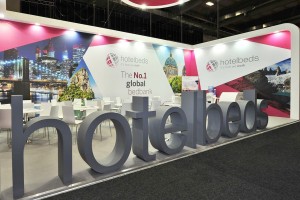 European tourism group TUI (TUIT.L) has agreed a deal to sell its Hotelbeds unit to private equity group Cinven and Canada Pension Plan Investment Board for 1.191 billion euros (US$1.35 billion) in cash, it said on Thursday.

TUI put its Hotelbeds unit, which sells hotel rooms to wholesale customers such as travel agencies and tour operators, up for sale because it didn’t fit with its other tour operating, cruise and hotel businesses.

Hotelbeds is the largest business globally of its kind with a market share of six percent. Headquartered in Palma de Mallorca, Spain, it reported turnover of 1.06 billion euros and underlying EBITA of 69 million in the year to end September 2015.

U.K.-based Cinven and CPPIB will back the existing management team and share governance of the business equally, said Shane Feeney, managing director and head of direct private equity at CPPIB, adding that he expected to use Hotelbeds as a platform for future purchases.

“We will be opportunistic with acquisitions,” Feeney told Reuters.

Sources familiar with the process had previously said that EQT was interested in buying Hotelbeds to go with its Kuoni purchase.

The proceeds will be used to invest in further growth and strengthen TUI’s balance sheet, TUI said, adding the transaction is expected to complete by the end of September.

TUI will likely invest in its hotel operating business and in attracting more business from Chinese customers, CEO Fritz Joussen was quoted as saying in an interview with German magazine WirtschaftsWoche on Thursday.

CPPIB and Cinven will look to expand the company’s hotel base in the Middle East, Asia and the Americas and to invest in its technology.

“We’re going to be focused heavily on building out that Asian growth, where travel growth is really booming,” said Chris Good, Senior Principal at Cinven. “There are plenty of opportunities to expand outside bed banks, into rental cars and ticketing as well.”

Cinven has experience in the travel industry having owned booking platform Amadeus from 2005 to 2011.

London-listed TUI is due to give a half-year trading update on May 11. The company was advised on the deal by Deutsche Bank and Bank of America Merrill Lynch. Financial advisors to CPPIB and Cinven were Lazard, Morgan Stanley and HSBC.

Update: CPPIB’s news release about the Hotelbeds acquisition can be viewed here.

By Victoria Bryan and Freya Berry