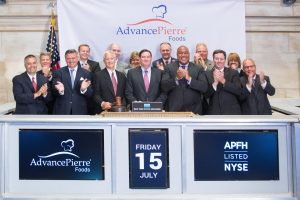 Sandwiches are simple. Take some bread, some meat and cheese, throw in a few condiments — that’s lunch.

Oaktree fully exited its stake in AdvancePierre when Tyson Foods acquired the purveyor of sandwiches, meats and food services for $4.2 billion last year. Oaktree’s $100 million investment, which it made in 2008, grossed the firm a 91 percent internal rate of return and 23x multiple.

“Clearly, [this is] one of the all-time great private equity investments and certainly the standout in the history of Oaktree,” said Bruce Karsh, Oaktree’s co-chairman and chief investment officer, during a 2017 earnings call.

“It’s even more astounding to note that this is not a high-tech company but a prosaic food producer and distributor.”

Prior to being acquired by Oaktree, AdvancePierre — then known as Pierre Foods — was a Madison Dearborn-owned beef-and-chicken producer with a teetering capital structure. Oaktree provided $35 million of debtor-in-possession financing while Pierre Foods went through voluntary Chapter 11 bankruptcy. That process ultimately led to Oaktree obtaining a 91 percent stake in the business, according to information provided by Skadden, Arps, Slate, Meagher & Flom.

The deal hewed closely to the overarching distressed-debt strategy that made Oaktree one of the world’s largest private asset fund managers, says Jeffrey Cohen, a Skadden partner who worked with Oaktree on the deal.

When Oaktree began building a position in its debt, Pierre Foods was an over-levered company with a relatively strong fundamental business: selling sandwiches and sandwich ingredients, as well as specialty-ingredient recipes. It was a prime target for a turnaround specialist like Oaktree.

Oaktree took an active role in the Chapter 11 restructuring. Pierre Foods emerged from bankruptcy with $280 million cleaved from its ledger. Paying down its post-bankruptcy debt, along with a recapitalization, created more than $180 million of distributions to Oaktree and its limited partners.

Alleviating Pierre’s immediate debt woes gave management room to expand into other segments of the snack and sandwich market.

In 2010, a $1.8 billion merger with Advance Food and Advance Brands substantially enlarged the company. The new entity, AdvancePierre Foods, finished 2010 with $187 million of Ebitda — almost 5x its Ebitda at the end of 2008.

Also in 2016, AdvancePierre held an initial public offering on the New York Stock Exchange, selling 21.4 million shares at $21 each. That, along with a secondary sale of the common stock in early 2017, generated $470 million of proceeds for Oaktree.

And finally, less than a year after the IPO, Tyson Foods, the parent of meat brands like Aidells, Sara Lee and BallPark, purchased AdvancePierre for $4.2 billion.

While the timing of Tyson’s offer was unexpected, it was viewed positively by the company’s stakeholders, according to Cohen. Investors who purchased stock in the IPO doubled their money.

Oaktree also benefited as the Tyson acquisition enabled it to sell its remaining stake in AdvancePierre. All told, Oaktree’s $100 million investment in Pierre Foods resulted in more than $2.3 billion of proceeds.

“This was a great example of what private equity is supposed to do: identify opportunities to invest in a company that has real potential, and also bring their expertise and talent to help that company achieve that potential,” Cohen said.

AdvancePierre’s executive team at the New York Stock Exchange for the company’s IPO on July 15, 2016. Photo courtesy of the company.