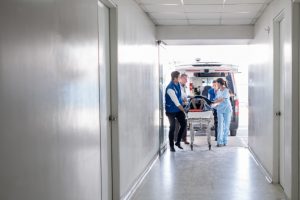 Five months after Varsity Healthcare Partners recapitalized newly created Emergency Care Partners, the company is adding a new investor while it more than doubles in size through its marriage with Progressive Emergency Physicians.

The newly combined provider of emergency medicine and emergency-department-management services will be based in Pensacola, Florida, servicing departments at 19 hospitals across Louisiana, New York and Pennsylvania. Emergency Care Partners enters the Northeast markets through the transaction.

Financial terms of the merger weren’t disclosed, but Emergency Care Partners post-transaction accounts for north of $20 million in Ebitda, according to people with knowledge of the matter.

In connection with the transaction, Regal Healthcare Capital Partners, a New York healthcare-services firm launched just over a year ago, will join as a minority investor.

Regal’s Kim will join the Emergency Care Partners’ board. Progressive CEO Andrew Sama will remain on the new company’s executive leadership team and will also serve as a director.

Yarbrough, who will also serve as a director, held the CEO post for close to 30 years at Envision’s physician practice management subsidiary, EmCare Physician Service. The executive most recently was executive vice president at Envision.

Emergency Care Partners will continue to differentiate itself through a focus on emergency medicine and related services within small- and medium-sized hospital departments.

Most players of scale — Blackstone’s TeamHealth, EmCare, Schumacher Clinical Partners, for example — concentrate on larger emergency departments and have tended to fuel growth largely via M&A.

Its strategy to win new business — or rather, unseat incumbent emergency department providers — will revolve around a focus on quality service and technology, physician-equity partnerships, as well as its ability to keep overhead costs and leverage levels low, one of the people said.

Both companies have grown entirely through organic efforts prior to the merger.

The Los Angeles firm invested in Emergency Care Partners out of its second fund, which raised $300 million in January 2017.