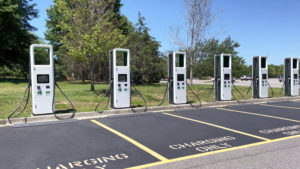 Launched out of stealth in May 2021, TeraWatt focuses on non-personal vehicles. “This is an area where there is more need and a different layer of service that is needed to deliver,” Munger said.

As battery technology and other innovations emerge, the adoption of EVs in commercial transport and the logistics sector has been ticking upward. “What we are doing is to help fleets start to plan as well, and it’s going to take one-to-two years for some of these projects to kick off, so you need to get going in order to deliver back to your customer,” he said.

Munger said automakers plan three or four years in advance and therefore supporting services such as charging systems should follow suit. “That pinch point is now, and so that’s really been the key piece for us,” Munger said.

“We are in a moment when the adoption of electric vehicles is accelerating, and manufacturers are coming up with better models,” he explained. “As battery costs have come down and the industry has ramped up, we are beginning to see the start of a crossover in a number of areas where EVs are cheaper, and sales are going up relative to traditional combustion engines. As that sort of transition happens, it’s going to cause a huge amount of demand.”

The government is channeling funding toward the adoption of EVs through the Bipartisan Infrastructure Law and the Inflation Reduction Act. States are also promoting and incentivizing the wide adoption of EVs, including passing legislation that phases out combustion engines in the future. But, as Munger said, it can be slow and hard to navigate the regulatory side in different jurisdictions.

In the face of fluctuating gas prices, Munger said TeraWatt’s charging systems offer an economic advantage of a fixed pricing.

And in terms of growth, he said: “There aren’t many operators in this business yet, and so it’s really about acquiring the right property sites and then building them for customers. TeraWatt has been buying and owns a portfolio property and will continue to expand that significantly.”

The TeraWatt deal represents the fourth investment for Vision Ridge in this space. In 2019, Vision Ridge exited its EVgo business to LSPower. The firm is looking forward to expanding TeraWatt’s geography and open more markets.

“This industry is at an inflection point, and we have a team and an approach in TeraWatt that we think is very powerful to scale what is a complicated and critical piece of infrastructure,” Munger said.

“When we can do that, not only in one location, but across the country in a dependable way, we can support businesses to deliver products cheaper, effectively and with less emissions,” he added. “It’s going to be hard to do, but it’s important and we believe it could be the winner in this asset class.”