The default list of PE-backed companies from Standard & Poor’s’ latest Weakest Links report grew to 12 from 1 the last time Buyouts published the list.

Of the 11 new additions, two had affected debt over the $1 billion plateau. Permian Resources, the Oklahoma City oil-and-gas developer, holds more than $1.1 billion in debt. Permian is backed by Energy & Minerals Group and OnyxPoint Global Management.

EXCO Resources, another explorer and developer of oil and natural gas properties, had nearly $1.1 billion in debt. The Dallas company is backed by Bluescape Resources.

S&P assigned selective default ratings to the companies after both entered distressed exchanges of their debt.

Consumer-products-focused companies led the overall Weakest Links list, with 17 companies, followed by the oil-and-gas sector, with 14.

This marks the second consecutive quarter where company count and total affected debt both fell. The 61 companies from June’s report combined for $80.5 billion, compared with 79 and $147.5 billion in February — a difference of $67 billion, or 45 percent. Both of June’s totals sit at the lowest they’ve been since November 2015.

The media-and-entertainment industry once again led the report in dollar amount: Eight companies made the list with $32 billion in debt. iHeartMedia drove the sector to the top with its $20.7 billion in affected debt. The mass-media giant is backed by Bain Capital and Thomas H. Lee Partners.

All told, 236 sponsored and non-sponsored companies were on the list. The entire list has aggregate affected debt of $271 billion.

To make the Weakest Links list, companies must have had speculative corporate credit ratings of B- or lower with either a negative outlook or a negative CreditWatch implication on May 17.

From 1981 to 2016, an average of 7.5 percent of all global entities rated B- defaulted within 12 months. The average default rate was much higher for entities rated lower than B-. 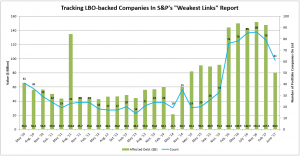