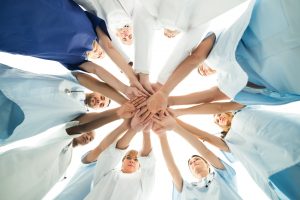 Webster Capital is buying its third healthcare staffing investment in just over a year.

The deal comes on the heels of Webster’s October 2017 deal for Cirrus Medical Staffing, a Charlotte, North Carolina, provider of travel nursing. Webster in February 2017 invested in a recruitment firm for life-sciences companies, PharmaLogics Recruiting.

Terms of Webster’s latest play in the sector weren’t disclosed, but the price tag for Emerald equated to about 6x the Los Angeles company’s $12 million of 2017 Ebitda, Buyouts has learned.

Whether the PE shop plans to combine one or more of its staffing investments remains to be seen, but the firm has a history of merging separate investments into a platform of greater scale.

For instance, Webster bought BAART Programs in June 2015 and MedMark Services in October 2015, and ultimately fused the two to create BayMark Health Services.

BayMark, Lewisville, Texas, as of just a few days ago became the largest opioid-treatment provider in North America when it added more than 70 clinics to its network by acquiring Canada Addiction Treatment Centers.

The timing to develop another player of size may also be logical amid what appears to be an uptick in sponsor interest in healthcare staffing broadly speaking.

TPG Growth-backed Medical Solutions in February prevailed in the Piper Jaffray-run auction for Trivest Partners’ PPR, another travel-nurse agency. The company was marketed off about $20 million of Ebitda, Buyouts reported.

PPR traded for an Ebitda multiple of about 11x, one source said. Another source put the multiple closer to 10x, or 8x or so when accounting for synergies.

Medical Solutions, for its part, fetched a valuation of about $500 million in May 2017 when Beecken Petty O’Keefe sold the company less than two years after its recapitalization, Buyouts reported. TPG Growth, TPG Capital’s middle-market and growth-equity arm, ultimately claimed victory over fellow sponsors in the Jefferies– and Piper Jaffray-run auction.

One of the largest PE-backed healthcare-staffing companies to watch is CHG Healthcare Services, of which Leonard Green took control in a November 2012 secondary buyout from J.W. Childs. Ares Partners co-invested in the transaction.

While terms of the CHG deal weren’t disclosed, Reuters reported prior to the sale that the sellers aimed to fetch about 11x Ebitda to produce a $1 billion-plus transaction.

Other financial buyers that have played in the space are Heritage Group, Thomas H. Lee and Altaris Capital Partners, to name a few.