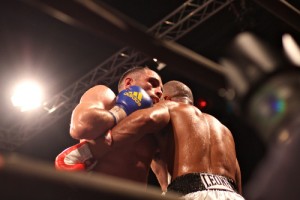 Samsung suddenly seems a lot like a boxer whose every punch at the world champion, Apple, is bringing it closer to a legitimate shot at the title.

Samsung’s handsets are hot. Late last year, Samsung’s Galaxy S III became the best-selling smartphone in the world. (CNet also anointed it best device of 2012, ahead of the iPhone 5.) The company is enjoying nearly 30 percent of all handset profits. And judging by an excellent New York Times profile of Samsung last weekend, at least one wireless carrier, Sprint, appears ready to endorse Samsung over Apple. (Its CEO, Daniel Hesse, told the Times that Samsung was a “terrific partner,” noting its un-Apple-like willingness to collaborate on its designs with carriers.)

Samsung is trying to keep up the pressure by cornering the very same app developers that have made the iPhone so addictive. This past Monday, at the AllThingsD conference in Dana Point, Calif., Samsung EVP David Eun announced two, soon-to-open “innovation centers,” in downtown Palo Alto and in New York City, where Samsung will be aggressively courting talented developers in a way that Apple never has. Part of its plan involves sharing insights into future strategies with developers. The centers will also be home to both venture and M&A arms that look to back and acquire early-stage companies.

No doubt some out there will see the centers as little more than window dressing. But Eun’s announcement is only the latest in a series of incursions on to Apple’s turf. As AllThingsD noted earlier this week, Samsung also announced a new R&D center on 8.5 acres in Mountain View last September, and in December, it announced plans to transform the San Jose site of its semiconductor and display panel business into its new R&D headquarters.

Some say Apple should turn the other cheek. “I don’t feel that Apple has any need to react at all,” says Dave Girouard, who worked as a product manager at Apple in the ’90s before becoming head of Google’s enterprise business, a role he left last year to found the crowdfunding service Upstart.

“When I think about attracting developers to a platform – which we thought about a lot at Google – they have two parts to their mind: the artist who really cares about the tools being used and what can be built with them, and the businessperson who is concerned with making a living. And it’s clear that Apple maintains an incredible advantage. Developing on the iOS is just incredibly gratifying to developers, and Apple is doing an incredible job of [enabling developers to make money].”

Indeed, earlier this week, at a Goldman Sachs conference, Apple CEO Tim Cook announced that Apple has so far paid out $8 billion to App Store developers.

Still, the fact that Cook bothered with the Goldman conference — where he largely defended Apple’s stock, which has lost a third of its value in the last six months — was telling. As the Guardian noted the day of his appearance, it’s not every day you see an Apple CEO making the rounds.

And while Apple’s $140 billion in cash probably means it won’t be going bankrupt any time soon, there’s certainly reason to think some change is in order, including, possibly, becoming cozier with third party developers as Samsung is setting out to do.

“Apple can’t do everything,” says Craig Elliot, the cofounder and CEO of new cloud company Pertino, as well as the recipient, years ago, of a Porsche from Steve Jobs. (Jobs lured Elliot to Cupertino when he learned the then 23-year-old computer store employee was selling more Macintoshes than anyone in the U.S.)

Though Elliot spent a decade heading up Apple’s Internet and e-commerce business and remains highly supportive of the company, he admits to getting “a little frustrated” that Apple hasn’t done more to “slice off pieces” to turn over to developers. “Apple is so good at operating systems and the design of the machines themselves, but by more aggressively working with third parties, Apple could be extending its development team in a whole series of places.”

Ultimately, Elliot thinks that Apple would do well to “expand and be expansive.”

It’s probably time. Though Elliot characterizes market concerns over Apple as disproportionate, he also notes that Apple is not and never was infallible. “The company has a phenomenal franchise. It isn’t blowing up,” he says. “But the [perceived] perfection that it has enjoyed wasn’t true, either.”