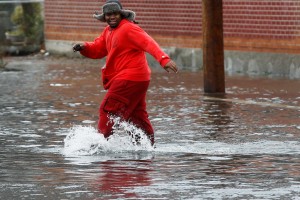 New York City ground to a halt Monday as residents prepared for the worst of Hurricane Sandy. Both the New York Stock Exchange and the NASDAQ were closed, while Wall Street was deserted.

Private equity, despite fears of flooding and power outages, kept on working. KKR asked all of its employees based in New York City to stay home and work from there, a spokeswoman says in an email. “We are effectively closed but working remotely,” the spokeswoman says.

Nearly all NYC private equity firms polled by peHUB told their employees to work from home today and Tuesday. Some aren’t listening. CCMP Capital’s New York office is closed and staff was told to work remotely, a PE source says. “Some are there but the office is officially closed,” the person says.

The Carlyle Group is open, spokeswoman Elizabeth Gill says in an email. The firm’s Washington DC office follows the federal government closing guidelines. Employees can come in but they are told that their safety is paramount, Gill says.  “New York employees are being advised to work from home,” she says in the email.

The worst of Hurricane Sandy had not yet hit New York City as of mid-afternoon Monday. The hurricane is packing 90-mile an hour winds and is expected to make landfall off of New Jersey later today. Sandy is expected to knock out power, flood streets and devastate homes along the East Coast. In preparation, New York City officials shut down the subway system Sunday evening. The Big Board and the NASDAQ are also closed.

One PE executive says its “difficult to do work in NYC today,” but his firm is working hard to make progress on deals. “We have several new things we are working on that involve companies beyond the East Coast,” the source says.

Another PE exec in Boston says he had to cancel a board meeting in New York tonight. Business, however, continues. “The good news and the bad news is that with video cameras on our computers, email and phones, the show can continue to go on without much fanfare,” the source says.

“As long as the internet holds up, we’ll just VPN in and keep on going,” a different PE source says.

The storm is hitting some PE pros harder than others. One private equity executive says he had to evacuate his house and his firm, located in Connecticut, was closed.