PE Hub
Home Opinion When can you leave it all behind? MAC clauses in M&A
Return to search
Opinion 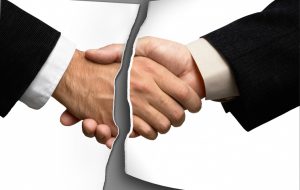 You signed an agreement to purchase a business, and still have a few months before closing.

New regulations are announced which you expect will have a significant negative impact on the target’s business.

You are starting to get cold feet—can you walk away before closing?

In M&A transactions, one of the main risks that buyers grapple with is the risk that the business ultimately delivered on closing falls short of what the buyer agreed acquire.

The allocation of this risk between the buyer and seller is negotiated by the parties, and the material adverse change – or “MAC”—provisions of the contract are a key mechanism for risk allocation.

Buyers routinely negotiate for protections to address these circumstances, including comprehensive representations and warranties, indemnification clauses and purchase price escrows or holdbacks.

However, in some instances, events may transpire between the signing of the purchase agreement and the closing of the transaction that go beyond a mere surprise and have the effect of so negatively impacting the target business that a buyer may wish to walk away from the transaction.

In such cases, a buyer will typically only be able successfully abandon a transaction if it can demonstrate that the target has experienced a material adverse change, and key to doing that is the question: what is “material”?

For as much time as dealmakers spend negotiating the provisions of a purchase agreement that relate to MACs, comparatively little case law has accumulated on what it means for something to be material and adverse enough to pass the test.

In Canada, there is very little guidance from the courts on this question, particularly in the context of public company M&A transactions or transactions involving significant acquisitions. Where the issue has arisen, Canadian courts have tended to rely on definitions of materiality in non-contractual contexts, such as accounting practice handbooks and securities law.

An Ontario court recently found that a change to an oil company’s financial outlook that was caused by volatility in oil prices was not material for purposes of a MAC clause in an underwriting agreement, though there are examples of Canadian courts determining that adverse changes were material, including:

• a 3.1 percent reduction in the market value of a hotel property;

• a reduction of 3.2 percent in inventory and of 13.9 percent in shareholders’ equity.

American jurisprudence on the subject is more robust and, notably, includes a recent decision of the Delaware Court of Chancery, Akorn v Fresenius KABI AG (2018), in which that court, for the first time, found in favour of a buyer that purported to terminate a merger agreement on the basis that the target had suffered a MAC between signing and closing. The Delaware Supreme Court subsequently affirmed the Court of Chancery’s decision.

While the Court of Chancery reached its conclusion on the basis of the specific set of facts before it, the decision provides some guidance to buyers on seeking to walk away from a deal because of a MAC having occurred.

Given the dearth of Canadian case law on MAC clauses and Canadian courts have taken guidance from Delaware courts in the past, we expect the following to be applicable in the Canadian context as well.

• The threshold for establishing that a MAC has occurred is very high. Mere “buyer’s remorse” is not sufficient for a buyer to persuasively assert that a MAC has occurred. The Court of Chancery indicated that the effect of the event must “substantially threaten” the earnings potential of the business in a “durationally-significant” manner (meaning that the impact must be felt over the course of years, not months). In the Akorn case, the target experienced a host of problems that had a direct and enduring impact on value, chief among which were that the business, for a variety of reasons, “fell off a cliff” after the transaction was announced and that whistleblowers revealed widespread regulatory violations and pervasive data integrity and compliance problems.

• The buyer’s conduct during the interim period is critical. Buyers often have a contractual commitment to pursue the completion of the transaction and a buyer is not entitled to abandon that commitment simply because of intervening events that may cause it to reconsider the merits of the deal. In Akorn, even though the buyer was evaluating its options, including terminating the merger agreement, with counsel, the buyer continued to work towards closing, communicated frequently with the target during the interim period about its concerns and worked with the target to explore ways of suitably remediating the issues then at hand. At one point, it even offered to extend the outside date of the transaction to allow the target to address the business concerns.

• To the greatest extent possible, known risks should be addressed elsewhere in the purchase agreement. If a buyer is aware of specific problems associated with the target business that may worsen during the interim period, it should seek to negotiate specific protections for itself, such as a specific indemnity or a purchase price reduction, rather than expecting to rely on a MAC clause or the inability of the target to “bring-down” its representations and warranties at closing.

Instead, protect yourself against a “MAC attack” in other ways, including specific indemnities, purchase price adjustments and closing conditions.

Laurie Duke is a partner at Torys LLP, practicing corporate law with an emphasis on M&A and private equity.