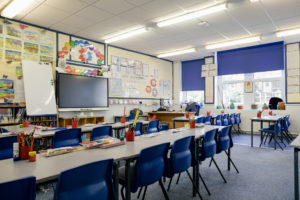 Education was transformed dramatically over the last two years as schools struggled to meet the demands of distance learning. Now that the worst of the pandemic may be over, PE Hub asked Dani Forman, Axial’s director of research, why PE firms are still interested in the sector.

The education industry “checks a lot of the PE investable-asset checkboxes,” he said. “For starters, it is non-cyclical, often produces recurring revenue and has predictable expenditures and cashflows. The last two years have driven a lot of innovation in the space as schools and other educational institutions had to grapple with operating during lockdowns. Private equity investors have taken notice of that innovation and the expanding educational market that came as a result, providing the capital necessary to fuel growth.”

He noted that over the last 24 months, deals in the education sector marketed via Axial’s platform have run the full spectrum of sub-sectors, ranging from traditional schools to vocational programs, edtech and more.

“One particularly interesting sub-vertical within the broader educational space is training services and technology companies,” he said. “A few specific examples of Axial-marketed deals include training schools for airplane, helicopter and drone pilots, a cannabis career school, and FBA (Fulfillment by Amazon) certification companies for the growing hordes of Amazon entrepreneurs. We see these training programs being driven by the tailwinds of a more entrepreneurial workforce, enabled by technology. The private equity community has taken notice and has shown a keen interest in getting involved.”

Axial is a private deal platform for professionals who own, advise and invest in North American lower-middle-market businesses. Last year, Axial developed a new tool to measure interest among its members, and education stood out as the sector garnering the highest rate of interest among buyers.

The new metric is called the pursuit rate, and it is designed to complement existing data that buyers and sellers of lower-middle-market businesses traditionally rely upon, namely deal volume and EBITDA multiples. This pursuit rate tracks buyer interest in available assets as soon as a deal goes to market on the Axial network.

So why did the education sector garner the highest pursuit at 22.52 percent? (The next closest was the financial services sector at 20.49 percent).

“One hypothesis is a simple discrepancy between supply and demand,” Forman said. “There are simply more buyers interested in education than there are deals in the space. Scarcity, relative to supply, does generally translate into higher pursuit rates among buyers targeting that space.”

He noted that the pursuit rate is akin to a Nielsen rating. It tracks the targets that prospective buyers are “watching” and increases as interested parties request additional information. If NDAs, IOIs and LOIs reflect the progression of interest among dealmakers, the pursuit rate offers insights into the very first impulses of prospective buyers.

“In looking at the education deals marketed via Axial that were above the 15 percent index, there was a tilt toward ‘edtech’ versus more traditional childcare and schools,” he said. “While all the data presented in our Pursuits Report is anonymized and confidential, I can share that one recently marketed education information and software company had a 53.85 percent pursuit rate, meaning more than half of the prospective buyers and investors who were offered the opportunity to review the deal indicated that they were interested in taking a closer look.”