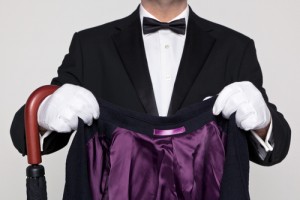 (Reuters) – Tensions started rising at Men’s Wearhouse Inc over the past six months, as founder and executive chairman George Zimmer increasingly butted heads with his handpicked CEO over the clothing retailer’s strategy.

CEO Doug Ewert wanted to sell the company’s K&G Fashion Superstore business, while Zimmer wanted to keep it, two sources familiar with the situation said. Zimmer also objected to rising compensation for top executives, including Ewert, while the board thought it was appropriate, the sources said.

Zimmer, who is known to U.S. TV audiences for his advertising catch phrase “you’re gonna like the way you look — I guarantee it,” was seen by company directors to be undermining Ewert’s authority, the sources said.

Last week, the Men’s Wearhouse board abruptly fired Zimmer from the chairman’s job, even as its share price had climbed about 50 percent in the past two-and-a-half years. The board, populated by some directors Zimmer has known for decades, told him of the decision the day they announced the firing, the sources said.

Zimmer, who was shocked by the decision, quit the board on Monday, and is now mulling his options, they added.

While Zimmer is still unclear what those options might be, an attempt to stage a comeback at the company is possible. He is talking to his advisers, including legal counsel Cooley LLP, but a decision is not imminent, the sources said.

Industry bankers and lawyers said these options could involve teaming up with private equity firms to launch a buyout bid or trying to wage a proxy battle with the help of shareholder activists or institutional investors.

“Typically a founder will not leave the company that easily as he thinks it is his baby,” said Larry Cagney, a partner at law firm Debevoise & Plimpton LLP, which is not involved in the situation.

Spokesmen for both Men’s Wearhouse and Zimmer, who founded the clothing chain in 1973, declined to comment. Ewert was unavailable for comment.

Men’s Wearhouse, based in Fremont, Calif., operates more than 1,100 stores under the Men’s Wearhouse, Moores and K&G brands. The stores sell suits, tuxedos and other articles of clothing.

The story behind Zimmer’s surprising exit, which has not been previously reported, adds a new twist to an unfolding corporate drama that has riveted investors, employees and the broader public. The company’s Facebook page, for example, was filled with customers urging his return.

“You have lost my business. I guarantee it,” wrote Ed Elias, of Lauderhill, Fla.

“Every time I read a post from Men’s Wearhouse, I read it in George Zimmer’s voice,” wrote David Coy, of San Antonio, Texas, in reference to the founder’s raspy baritone.

Founders of other companies who have faced similar situations have had mixed success in taking back the reins of their firms. Last year, for example, Best Buy Co Inc’s former chairman Richard Schulze tried to buy the electronics retailer with the help of private equity firms. He failed in that bid, but managed to find his way back on the board 10 months later. He now serves as Best Buy’s chairman emeritus.

Schulze, however, had owned about 20 percent in Best Buy.

The Zimmer family’s combined equity stake of about 4.7 percent — Zimmer holds about 3.5 percent — is not large enough on its own to pressure the company to allow him to return.

He also has no provision in his employment contract that compensates him following the ousting. A licensing agreement will award him $250,000 for each of the next four years if Men’s Wearhouse continues to use his image in advertising.

Zimmer’s spectacular downfall was all the more unexpected because he had picked Ewert, who had worked at the company for nearly two decades, as his successor two years ago. The two shared offices next to each other, but the relationship started to unravel in recent months, the sources said.

One of the issues that led to Zimmer’s ouster was his growing concern about rising compensation for the top executives, which he opposed.

Ewert was awarded a base salary of $1.25 million for the current year, more than double last year’s figure, and a potential annual bonus of up to $1.25 million and other incentives.

Under Ewert, the company’s revenue grew to $2.48 billion last year, up from $2.01 billion the year before. In its most recent quarter, it posted better-than-expected results, with sales rising 5.1 percent to $616.5 million.

Another sticking point between Zimmer and the board was the sale of K&G, a clothing retailer that Men’s Wearhouse bought in 1999. K&G has been underperforming and Ewert hired investment bank Jefferies to sell it, while Zimmer was not convinced, the sources said.

Soon these tensions came to a head, and the board unanimously decided to oust Zimmer, taking both investors and the founder by surprise, the sources said.

Over the years Zimmer has built a loyal following among some of the company’s 17,500 employees.

“Zimmer makes us feel like family,” said a Men’s Wearhouse store manager who has met the founder several times but requested anonymity for fear of losing his job.

The store manager said Zimmer often visited the store and talked to customers. “He is an awesome guy, and for a company like this to come and fire him, is ridiculous.”

Men’s Wearhouse has not given any reason for Zimmer’s dismissal. In May, it had nominated the founder for re-election to the board, but the June 19 annual shareholder meeting was rescheduled after his ouster.

Among Men’s Wearhouse directors is Deepak Chopra, the new age guru. Over the years, Chopra has taught Zimmer not to be upset about the vagaries of life, one of the sources said.

Chopra could not be reached for comment on Monday.

Last week, Chopra told Reuters in a statement that he was “very excited about the future of the company” and that he would “totally support our CEO Doug Ewert and the management team of the Men’s Wearhouse.”