There’s no shortage of professional networks available to those looking for salaried jobs. Think LinkedIn, BranchOut, Monster, TheLadders and Glassdoor to name just a handful. But job seekers in pursuit of hourly shifts are pretty much limited to either scouring Craiglist or simply hoofing it from business to business.

Chicago-based Shiftgig hopes to change that by focusing on the overlooked. Indeed, rather than placing attorneys, journalists, or business development executives, 11-month-old Shiftgig is connecting waitresses, cooks, and hotel employees with employers — and it’s gaining some traction in the process. Already Shiftgig claims that more than 100,000 job seekers and 4,000 businesses have used the site. Perhaps owing to an actual business plan — the company will focus, like LinkedIn, on advertising and later on subscriptions — it just raised $3 million in funding, too.

To learn a bit more about the company, I chatted today with Shiftgig founder Eddie Lou, who spent the previous ten years at the early-stage venture capital firm OCA Ventures in Chicago. We talked about his vision for Shiftgig, what verticals the startup might inch into next, and how long that $3 million will last, among other things. Our conversation has been edited for length. 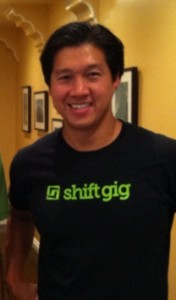 Shiftgig is targeting businesses that largely aren’t accustomed to posting jobs online, including restaurants and cafes. How do you make them aware of Shiftgig and bring them along with you?

Actually, we talk to a lot of these small business employers, as well as partner with affinity groups to send [our target customers] emails, and they do post online. They typically try using their personal network first, then they look at walk-ins, but they also post jobs online – just not on, say, CareerBuilder. If they’re trying to find an hourly person, they don’t want to spend $400 to post a job.

Meaning that your biggest competitor is Craigslist?

That’s one of them.

How are you reaching the job seekers?

We reach them through a combination of things, including SEO and social media and word of mouth. But the site is also a community. Previously, I worked at a VC firm and some of my friends are other investors and other tech entrepreneurs. Well, bartenders and service industry people hang out, too, so when one person has success quickly [in landing a new gig], a whole group knows about it.

Shiftgig is a social network, among other things. Do job seekers have to join or can they just visit the service using Facebook Connect?

Some register with Facebook Connect and some register with email, after which they can message each other and things like that. Our primary feature is heavily jobs related, but our users started asking if they could connect with other people and ‘how can I get a referral into that job’ so we now allow connections not just between employers and job seekers but [job seekers and other job seekers]. Another benefit of the social network is that you can show off your number of Facebook followers and Twitter followers without [giving strangers access to what you want to keep private].

Why are those numbers beneficial to employers?

Because if I’m a manager and I’m looking to hire a salesperson, I want to know that they’re sociable and have a lot of contacts. The same could be said of someone who wants to be a hostess in a restaurant. It shows their social influence.

Are there many sales jobs at Shiftgig? Who’s mostly using the service right now?

So far, we’ve seen the most interest in the restaurant space; that’s the vertical where we first started. Then hotels came onto the site and said hey, we have restaurants in our hotels; can we list? Next thing you know, we’re in hotels.

What verticals are next?

We’ve had some retail places ask for our help [so that’s next]. We’ve had offers to move into healthcare, customer call centers and other verticals, but right now it makes sense for us to stay focused on hospitality and retail.

As a case for Shiftgig, you’ve noted that 98% of 18  to 22 year olds are on Facebook and not LinkedIn. Do you consider BranchOut — a jobs service that’s tailor-made for Facebook — to be a threat? Could it — sorry — branch out into your business at some point?

I actually spoke with [BranchOut founder] Rick Marini about a year ago, and while his play is very Facebook-focused, and he’s building a network against LinkedIn, I don’t think we’re in the same vertical. We had a good discussion about that, in fact. He told me then that there’s going to be a need for niche vertical communities. Meanwhile, he wants to be all things to all people on the Facebook platform.

Shiftgig is available to employers and job seekers in eight cities, including Chicago, New York, L.A. and Washington, D.C. Where do you expand next and why?

We’re actually taking a pause on geographic expansion and instead growing in those cities where the service is already available by adding new verticals that are closely aligned in the hospitality space. Then we’ll plan out [next moves].

One of your investors is Ken Pelletier, a former CTO of Groupon. Do you mind sharing how Groupon’s downward trajectory is impacting the city, if at all?

The success of Groupon definitely helped to ignite some excitement in the Chicago’s tech industry, along with the incubator Excelerate and 1871 [a new, 50,000-square-foot tech center that recently welcomed 3,000 Google engineers]. In fact, Chicago is now at an all-time high in terms of both the number of startups and startups receiving capital. Obviously there are people [from Groupon] with less money to invest [in startups], but I’d say Chicago remains strong despite Groupon’s price going down.

As for that fresh $3 million, how many employees do you have and how long do you expect your funding to last?

We have 11 full time employees, with 7 of them product related and the others in Internet marketing, business development [etc.]. We expect [this first round of funding to last] twelve to eighteen months.