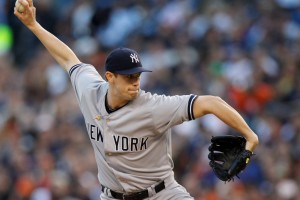 Providence Equity Partners and Goldman Sachs may finally get to cash out of the YES Network, which televises Yankee games, after holding the stake for eleven years.

News Corp. said Tuesday it has agreed to buy a 49% stake in the Yankees Entertainment and Sports Network. Financial terms were not announced. The deal values the entire YES Network at about $3 billion, according to Reuters. Sellers include Goldman Sachs and Providence Equity Partners.

The transaction allows News Corp. to boost its stake to 80% after three years. Yankee Global Enterprises will retain a “significant” minority stake in YES at that time.

MLB must still approve the media rights agreement. News Corp.’s investment in YES is expected to close by the end of the calendar year.

“This transaction underscores the great value we and our partners created in establishing the YES Network and sets the network on the path for even greater achievements in the future,” says Hal Steinbrenner, Yankee Global Enterprises chairman, in the statement. “We are excited to have News Corporation as a partner.”

Providence Equity, the media-focused PE firm, along with Goldman Sachs, invested in YES in 2001. Goldman originally provided $335 million for a 30% stake, while the Yankees have 34% and a group led by Raymond Chambers, the former owner of the New Jersey Nets, has 24%, a source says. Providence invested $65 million and owns 7%, a different person says.

Providence and Goldman reportedly explored a sale of their YES stake in 2007 but nothing happened.

With the current sale, Goldman and Providence are offloading much of their stake to News Corp. and will retain a small holding, likely in the single digits, a different person says.

In three years, once News Corp. increases its stake to 80%, Goldman and Providence will completely cash out of YES, the second source says. The original investors of YES are expected to make about 4.5x – 5x their money, sources say.

The YES investment comes from Goldman’s merchant capital division, which is run by Rich Friedman and overseen by Gerry Cardinale. Cardinale, a Goldman partner, is retiring in January. GS Capital Partners 2000 LP, a fund that collected $5.25 billion, is the vehicle that invested in YES.