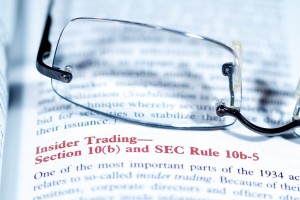 The government said Teeple then tipped others, resulting in trades that led to more than $27 million in profits and avoided losses.

Teeple was an analyst at Artis Capital Management, a San Francisco-based hedge fund launched in 2001 that invests mainly in public technology companies, according to people familiar with the matter.

“Artis has been cooperating fully with the government’s investigation into this matter and has been advised by the U.S. Attorney’s Office that the firm is a witness in the investigation,” Bill McBride, a spokesman for the firm, wrote in an email.

Prosecutors said Teeple had also leaked information to Karl Motey, a California technology consultant who has pleaded guilty in the probe and been cooperating with prosecutors, the government said.

Riley, 47, and Teeple, 41, were each charged with three counts of securities fraud and one count of conspiracy, U.S. Attorney Preet Bharara in Manhattan said. They face up to 20 years in prison on each securities fraud count.

A third defendant, John Johnson, 46, pleaded guilty to one count each of securities fraud and conspiracy, Bharara said.

Johnson is the chief investment officer of the Wyoming Retirement System, which he joined as a senior investment officer in 2010, after the allegations in the complaint. The pension on Tuesday relieved him of all his investment and administrative responsibilities pending further review, according to Tom Williams, executive director.

Johnson had had various contacts with Teeple since 2005, when Johnson worked at a mutual fund, and made more than $136,000 on trades based on information about the Foundry takeover leaked to him by Teeple, prosecutors said.

“To the extent that these charges are true, we’re very disappointed,” Williams said.

“When David Riley and Matthew Teeple chose to traffic in inside information involving high-tech companies, they embarked on a high-stakes game that has repeatedly proven to be unwinnable,” Bharara said in a statement.

Nathan Hochman, a lawyer for Teeple, said his client intends to defend himself against the charges.

John Kaley, a lawyer for Riley, did not immediately respond to requests for comment. Joshua Franklin, a lawyer for Johnson, declined to comment.

Riley and Teeple were arrested on Tuesday morning in California and were expected to appear later in the day in different federal courts in that state.

The arrests are the latest in a widespread government crackdown on insider trading in recent years.

Since October 2009, the Manhattan U.S. Attorney’s Office has charged at least 80 people, of whom at least 72 have been convicted or pleaded guilty.

Launched in 2001 by Stuart Peterson, Artis is known for having co-invested alongside Sequoia Capital in an $8 million round of financing in video-sharing website YouTube, before it was sold to Google Inc for $1.65 billion in 2006.

Artis is not named in court papers made public on Tuesday about the latest criminal charges.

Motey avoided prison time at his sentencing in February, at which a federal judge called him “a particularly impressive cooperator.” He was ordered to submit $40,000 and serve a year of supervised release for conspiracy and securities fraud.

Motey kept a notebook “he often used to memorialize conversations he had with various individuals, including Teeple,” the complaint states. Motey told investigators that a July 18, 2008, entry summarized a conversation in which Teeple explained that the Foundry acquisition might happen at $2.9 billion, according to the complaint.

Teeple also provided information about Palm Inc to Motey and Riley in exchange for the inside information on Foundry, according to the complaint.

In a June 15, 2009 telephone call that Motey recorded, Teeple said his firm owned “like 12 million shares” of the device maker, and that it was “gonna be a monster for a while.”

When Motey asked Teeple where in Palm his contacts were, he said “one guy is in dev and then, one guy is kind of a, senior marketing guy,” according to the complaint.