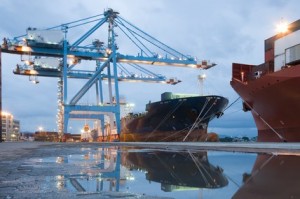 (Reuters) – Brazilian miner Vale SA said on Wednesday it plans to sell stakes in its cargo transportation unit, VLI SA, totaling more than 60 percent in three separate deals that together could be worth about 4 billion reais.

The stakes are to be sold to Canada-based Brookfield, Japan’s Mitsui and a Brazilian worker’s fund.

An economic slowdown and falling world commodities prices have caused Vale, the world’s second largest mining company, to scale back investments and seek partners for noncore aspects of its business so it can focus on iron ore, the key raw material for steel.

Vale said in a statement it has already agreed to transfer a 20 percent stake in VLI to Mitsui & Co Ltd for 1.51 billion reais ($667 million).

Vale retains control of VLI with 64.1 percent of its total capital, it said; but if the Brookfield deal goes through, its stake in the unit would fall to less than 40 percent.

No amount was given for the proposed sale of approximately 26 percent to Brookfield Brasil Ltda, a subsidiary of Brookfield Asset Management Inc., as the terms are still being discussed.

Vale’s chief executive, Murilo Ferreira, said the value of the deal would be proportional to the other stakes sold, which would bring the total value of the VLI sale beyond 4 billion reais. Ferreira said additional shares could be sold later.

“Vale will have a minority participation when the three shareholders have their parts,” he told reporters in Brasilia after meeting with President Dilma Rousseff. “In the future we could see a public offering so the Brazilian and international public can also be shareholders.”

VLI is an “integrated cargo logistics company,” and selling more than half of it would not cause Vale to relinquish control of its railways used to transport iron ore.