Public pensions tend to have a herd mentality: When a smart, influential LP commits to a fund, smaller pensions take notice and try to follow suit. Unfortunately, sometimes they follow each other off a cliff.

At the moment, it appears as though they’re dancing along the edge.

While some limited partners maintained relatively stable commitment paces in the past year, others, including groups considered among the industry’s savviest U.S. investors, cranked up their commitment paces to maintain target allocations to the asset class.

Meanwhile, high prices are keeping a lot of that capital on the sidelines. Globally, private-equity-backed buyout volumes plummeted 68 percent to $44 billion in 2016’s first three months from $137 billion in the fourth quarter, according to Preqin data cited by Verus Consulting.

This effectively puts more pressure on general partners to deploy committed capital later in their investment periods, even if opportunities remain limited.

The deals that are being closed are coming at an extremely high cost. Double-digit purchase-price multiples now constitute a “new normal” for U.S. private equity dealmakers, Pitchbook wrote in a first-quarter report.

In the middle market, purportedly the last haven for value-conscious investors, Ebitda multiples surged to 9.8x by the end of Q1, a full turn above where they were a year ago, according to data from BMO Harris Bank.

It’s not as though LPs are flying blind in the current fundraising environment either.

“To ‘invest through the cycles,’ staff must remain disciplined and make hard choices to avoid being swept along by the increasing momentum of the fundraising cycle,” California State Teachers’ Retirement System staff wrote in 2015. It added that staff was ready to make “hard choices” in how it constructs its PE portfolio.

Those “hard choices” resulted in Calstrs committing more than $3.9 billion to private equity in 2015, 35 percent more than in 2014.
The ultimate returns generated by the recent surge in commitments won’t be known for years. Many of the pensions cited above now direct their commitments to a smaller number of core managers with longer histories of above-average or top-quartile returns. (Apollo Global Management and Blackstone Group funds were among New York State Common’s largest commitments.)

That said, LPs are putting a lot of faith in the idea that those same GPs learned their lesson from the recession. Many marquee acquisitions by some of the largest firms benefiting from the current fundraising surge ultimately underperformed expectations. And if previous cycles provide any indication, return expectations from vintages in which fundraising surged have been muted. 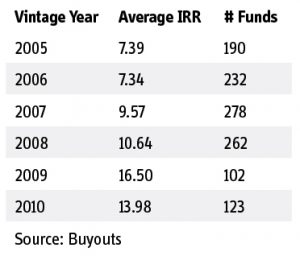 For example, Calstrs’s allocations to 2005-2008 holdings, which represent a little less than half its program’s committed capital, failed to net double-digit internal rates of return as of Sept. 30, according to retirement system documents. The rest of the industry experienced similar outcomes, according to Buyouts data (see Vintage IRRs).

“We’re in a totally different world right now,” Bain & Co’s Hugh MacArthur told Buyouts in February. “Figuring out how to find [a deal] and win and transform value in a meaningful way is more important than it’s ever been.”